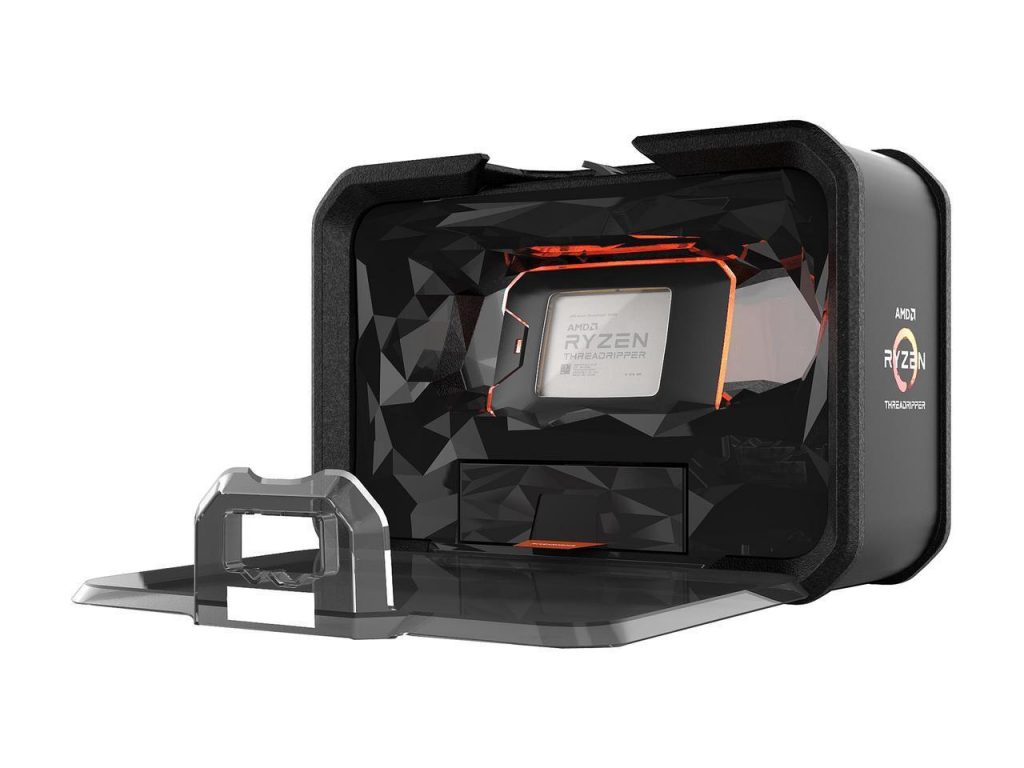 The AMD Ryzen Threadripper 2990WX is now available for pre-order. Its official release date is listed for August 13th which we confirmed earlier. The Threadripper 2990WX is considered AMD’s new flagship processor which is suppose to be the fastest HEDT processor released to-date. While this is geared more towards workstations and computational power houses, it’s very likely that we’ll see a target audience of extreme gamers willing to fork over the $1799 USD to build out their ultimate rigs. Whether or not this CPU will provide any benefit over the X-series Threadrippers (which are geared more towards gamers) is yet to be seen.

Newegg has officially listed the 2990WX on their website (Model: YD299XAZAFWOF) giving even more details and specs on the latest power house which is nice to see listed in such an official manner! Currently, it is only available for pre-order with a posted ship date of August 13th. The rest of the Threadripper 2000 series will be released later on in the year. Additionally, Newegg provided some new photos of the outside packaging of the Ryzen Threadripper 2990WX which we haven’t seen before: 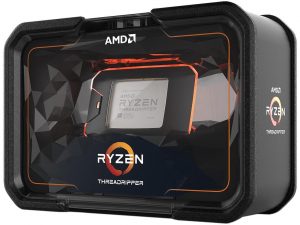 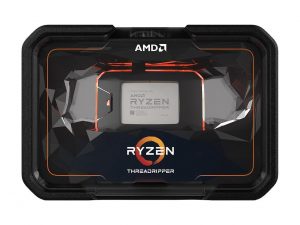 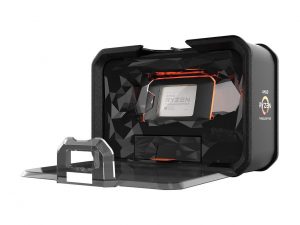 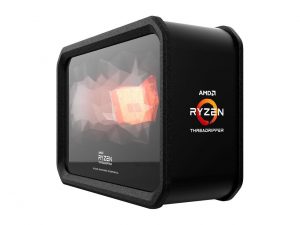 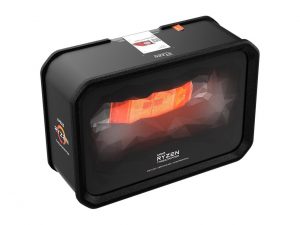 The Ryzen Threadripper 2990WX CPU is called AMD’s new flagship processor for a reason. Boasting 32 cores (64-threads), it will meet the demands of even the most computationally demanding HEDT requirements. Considering how many cores are stuffed into the CPU, you’d think AMD would drop the clock speed down in order to keep it from burning itself up. However, that’s not the case. The 2990WX features a clock speed of 3.0 GHz, with a maximum boost frequency of 4.0 GHz. Combine that with the precision boost overdrive frequency which adds another 200 MHz, the 2990WX can top out at 4.2GHz on just a single core! Impressive considering the TDP rating for the CPU is rated at a high but manageable 250W.

Additionally, the 2990WX is equipped with 16MB of L2 cache and 64MB of L3 cache to keep up with the massive computational load the cores are capable of handling.  The 2000-series ryzens will be based on AMD’s Zen+ core technology which features a 12nm die allowing for higher clock speeds while producing less heat. This goes to show the advantage of the Zen+ architecture over the previous Zen architecture when looking at AMD’s previous lineup of Thredripper CPUs. The Ryzen 1950X has similar clock speeds to that of the 2990WX CPU with half the amount of cores. When compared to Intel’s current offering when it comes to powerhouse CPUs, the Intel i9-7980XE, costs $200 more than the 2990WX and has 14 less cores with similar clock speeds. While we don’t have enough sample data to conclude which flagship HEDT processor is  the top dog, based on numbers, we believe the Threadripper 2990WX will probably take the cake.

Here are the specs of the soon to be released AMD Ryzen Threadripper 2990WX CPU plus AMD’s other offerings being released later in the year:

The new 2990WX CPU will be based on AMD’s new X399 chipset so get ready for a big push from major motherboard manufactures to release new series’ of motherboards capable of supporting AMD’s new offerings.

In addition to the launch of the 2990WX, AMD will also be releasing it’s “little” brother, the 2950X on August 31st. There has been no pre-order announcements from Newegg, or anywhere else that we could find. The AMD 2970WX and the 2920X will be released sometime in October this year.

We mentioned later last month that the “WX” series Threadrippers are geared more towards HEDT workstations and that the “X” series Threadripers are targeted more towards overclockers, gamers and high end system builders. The first X-series CPU, the 2950X will be upon us August 31st and will feature 16-cores (32-threads) with a max boosted clock of 4.4GHz. As this is considered to be a high end CPU, price for the unit is $899 so start saving now! 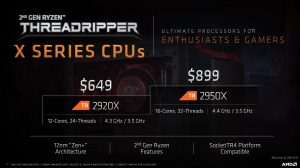 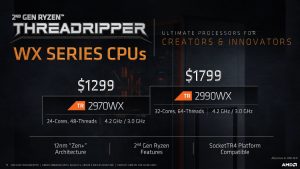 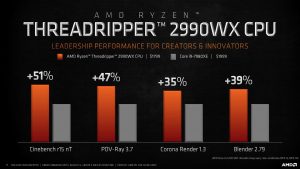 Cooling for the 2000-series Ryzens will be provided by AMD’s first in-house CPU cooler dubbed the AMD Wraith Ripper Cooler. The cooler sports a 8-heat pipe design with a single fan mounted in between the two adjacent stacks. While we don’t have a lot of info on the Wrate Ripper at this point, the thing does look massive and it should definitely be enough cooling power to keep the 32 cores from the 2990 WX under submission. 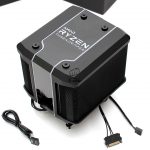 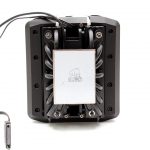 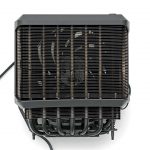 We will continue to provide more details about AMD’s Threadripper offerings, benchmarks, and cooling products come to light.

[…] the AORUS X399 Extreme. This motherboard comes just in time as AMD has just allowed the new 2000 series of Ryzen Threadripper CPUs which will be launching mid-August this year.  As this is considered a flagship motherboard from […]

[…] support up to 3200MHz. The modules will work on both the new Intel Z390 chipsets as well as the new AMD Ryzen X399 platforms. In-OS overclocking is also supported using Intel’s Extreme Memory Profile (XMP) […]

[…] liquid nitrogen. This almost 6GHz is welcomed confirmation of the overclocking potential the new Ryzen Threadripper 2000 series are able to muster. Since the 2990WX run as about 3GHz out of the box, this overclocked was an […]

[…] liquid nitrogen. This almost 6GHz is welcomed confirmation of the overclocking potential the new Ryzen Threadripper 2000 series are able to muster. Since the 2990WX run as about 3GHz out of the box, this overclocked was an […]

[…] the new Z399 chipset. This is not to be confused by AMD’s X399 chipset in current use by the 2000-series Threadripper processors which will soon be replaced by the X499 chipset next year.  The current naming of chipsets in the […]

[…] under the Z599 platform. The move is likely in direct response to AMD’s release of the new Ryzen Threadripper 24 and 32 core HEDT processors which are working hard on stomping out competition with Intel’s current X299 […]

[…] A few years ago a 10-core CPU such as the Intel i7-6950X use to cost upwards of $1700, now users are able to purchase these CPUs at less than half the price. This release comes a few months after the release of AMD’s flagship Threadripper the 2990WX processor. […]

Back to Top
wpDiscuz
8
0
Would love your thoughts, please comment.x
()
x
| Reply