During CES 2019 AMD shook up the graphics card scene when they announced the AMD Radeon VII (or Radeon 7), the first GPU on the market to feature 7nm process technology. With its release date just a few weeks away on February 7th, in early anticipation, Sapphire has just posted its Radeon VII which includes product images and detailed specifications which up until now were unknown such as the  base/boost clock speeds for the GPU.

Specifications for the card on paper look outstanding. Aside from the most talked about feature, the 7nm process, the Sapphire Radeon VII boasts 16GB of onboard HBM2 VRAM which operates at 2000MHz over a whopping 4096-bit BUS. The GPU runs at 1400 base clock with a 1750MHz boost clock.

The card features a triple fan cooling solution similar to that to what we saw during AMD’s Keynote during CES earlier this month. The card is a dual slot design which appears to feature the traditional horizontal heatipe design we’ve seen on plenty of other graphics cards. The back of the card is equipped with a matching white backplate which at this point is unknown if it provides any passive cooling or if it’s just for show.

Power to the GPU is provided by two 8-pin PCIe power connectors from the power supply. The card is expected to draw 300W while Sapphire recommends a 650W power supply for a single card setup.

As the date draws closer, we’ll likely be seeing more of these cards pop up online. More information can be found over at Sapphire’s product page for the Radeon VII. 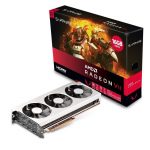 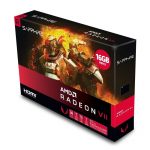 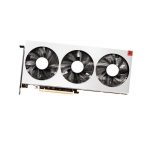 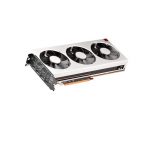 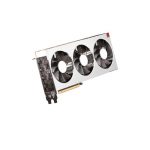 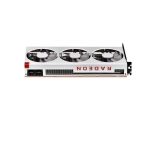 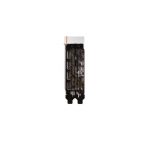 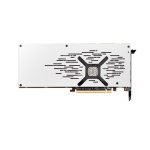