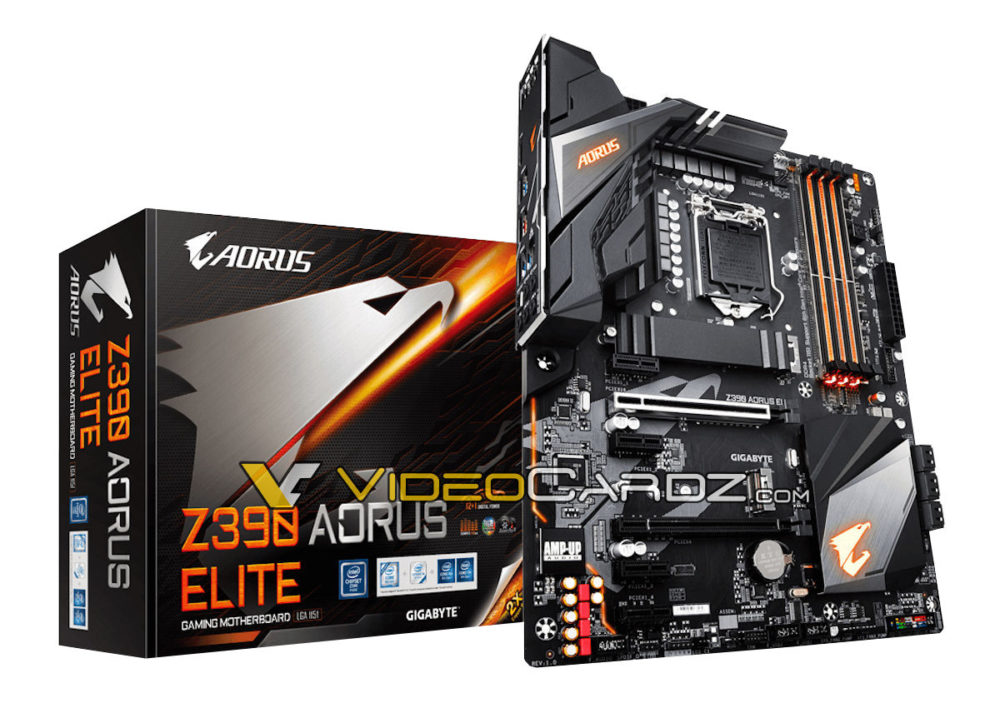 The new Intel Coffee Lake S refresh has caused some hype as motherboards manufactures are working on some major revisions around Intel’s new Z390 chipset. Pictures surrounding the new Gigabyte AORUS Z390 Elite motherboard have finally been leaked recently as the release of the new motherboards draws closer. The new lineup of AORUS boards will be replacing the current lineup of Coffee Lake motherboards using the Intel Z370 chipset.

The new Intel Z390 chipset dials the die size down to 14nm, reducing overall system power consumption. Other features such as USB 3.1 Gen 2 and wireless-ac support, were also added. The AORUS Z390 Elite motherboard is at the bottom tier of the Aorus ATX Motherboard lineup. Other higher-tier models include the Z390 AORUS XTREME, Z390 AORUS MASTER, Z390 ULTRA and the Z390 PRO (wi-fi optional).

Some of the features included in the new AORUS Z390 Elite motherboard include M.2 compatibility with an included heatsink, RGB lighting, metal reinforced memory and PCIE slots, and 12+1 CPU VRM power phase management.

The gigabyte aorus z390 elite motherboard is much more powerful and advanced than the other ones and we can know how it is being implemneted and the picture shows it all. To know more https://errorcode0x.com/fix-epson-printer-error-code-e-01/

The gigabyte aorus z390 elite motherboard is a strengthful device. It has so many advanced features and memory facilities. Keep sharing this type of post. I am gathering so many information from it.