Well folks, it looks like we have another keyboard on our test bed. This time it’s from Ducky, a brand we have yet to examine. More specifically, we’re looking at the Ducky DK9087 Shine II tenkeyless keyboard.

The Shine II was a smash hit among enthusiasts all around the world, who praise it for its quality and awesome features. Perhaps the most unique thing about the Ducky Shine II is the amount of models available:

The model we have here is the DK9087 Shine II which is tenkeyless, and this particular one has a green LED backlight and Cherry MX Red switches. Unlike rubber dome keyboards including those fake “gamer” keyboards, the backlight is actually bright on mechanical keyboards. For those unaware of the difference with mechanical keyboards, please have a look here. But to break it down, mechanical keyboards offer unparalleled quality, a much better keypress feel, much more reliability, much more customization, and some unique features. Let’s see if the Ducky Shine II includes all of this.

Without further ado, let’s look at the Shine II and how it was packaged. The box is quite plain in appearance.

On the back you’ll find a list of features, which we’ll go over later.

Upon opening the box, we see that the keyboard is barely protected. I now feel very grateful to have the keyboard in one piece. You can actually see in some of my pictures that the 5 key is out of position, but I fixed it afterward.

Inside the box you’ll find the keyboard as well as a user’s guide, folded up gold-plated USB cable (mini-USB on one end, full on the other), and a bag including red WASD keycap replacements and a keycap puller. I love accessories like this. There’s no PS/2 adapter however, but that’s because this keyboard has no PS/2 support.

Keeping it quick and straight to the point, I’d like more secure packaging but I am thankful for the accessories included. I wish all mechanical keyboards came with a keycap puller, and I personally love the WASD replacements. Having them a separate color really lets people know that you use this keyboard for gaming. If you aren’t really a gamer, then just don’t use the WASD replacements unless you really like them.

The Ducky DK9087 Shine II is a standard tenkeyless keyboard. This refers to the layout: take your standard keyboard, chop off the numberpad, and now you have the layout of the Ducky DK9087 Shine II. This compact form factor is great for gamers who need extra mouse pad space, or anyone who just doesn’t use the numberpad (which is a lot of people). Although I’ve grown to prefer the layout seen on the Cooler Master Storm QuickFire TK since it’s compact and has no loss of functionality, I can’t really complain about the standard TKL layout seen here.

As soon as I put my hands on the Ducky Shine II, I was in shock. I totally did not expect the build quality to amaze me, after having experience with the likes of the QuickFire Rapid, but it still did. Very solid build quality. The finish attracts fingerprints, but they usually go away quickly on their own, as long as your hands are somewhat clean.

The keycaps also have a distinctive, high end feel to them that gives me assurance they’ll hold up well over time. They seem to be ABS, but have a UV coating just like the recently reviewed CM Storm QuickFire TK. I absolutely hate the feel of typical cheap ABS keycaps, and they really get filthy over time. But I don’t see that being as big an issue here.

The back of the keyboard looks very sturdy and reinforced. Cable routing is noticeable, as well as a mini USB connection for the included USB cable. I wish every keyboard had a detachable cable. You can also see the four large rubber feet, and in addition, two folding feet. Also located here are four DIP switches. DIP switches 1 and 2 are to better enable Mac compatibility. The third one disables or enables the Windows key, which is very useful since accidentally pressing it during a game will minimize it. The fourth one enables either 6KRO or NKRO: the former meaning that only six keys will be registered at once (excluding modifiers), while the latter means you can press any number of keys at once and they’d all be registered. NKRO over USB is relatively new; I first heard of it on a retail keyboard with theCM Storm QuickFire Pro so lets see if the Ducky Shine II can also pull it off.

Now I’ll show you how the keycap puller works: simply push it in place like so. Make sure it isn’t too deep; you want to hear a light click sound. Pushing it down too far and then pulling might damage the switch.

Now just lift it upwards. Don’t yank it, but don’t be a wimp. Removing the keycaps reveals the mechanical switches underneath. In this case, it’s a Cherry MX Red switch, which has a light actuation force of 45g and is linear. They’re all mounted to a steel plate.

Now let’s see the keyboard with the WASD keycap replacements installed. The font on the keyboard is very neutral and hard to disagree with, and most will be pleased to see the lack of branding.

The only branding can be found on the Windows keys, as well as the spacebar. But who doesn’t like the little Ducky symbol? Especially on the spacebar.

Most top row keys have secondary functions. F1 to F7 are all standard multimedia keys. F10 cycles through backlight modes: Off, On, Pulsating, on key press, and another mode which makes the top row rapidly light up individually. F11 and F12 cycle through the five brightness settings, while F8 and F9 enable custom LED modes. Pressing FN + PrintScreen, or FN + Pause, will enter a Recording mode, in which you press whichever keys you want to light up. This mode lasts 30 seconds, and once you’re finished, you’ve just created your own backlight mode! Doing so replaces CM1 or CM2 (the ones on F8 and F9 keys respectively).

Now let’s look at the backlight modes. The first one is this, which enables only the letter keys, number keys, modifiers, and space bar.

This next mode enables the light on all keys, except for caps lock and scroll lock which are lit up when they’re enabled (this applies to all modes however).

After this, you’ll find a mode I really like: keys light up only on key press.

Custom Mode 1 enables the light on only the WASD keys.

Custom Mode 2 enables the backlight on only the arrow keys.

Like I described earlier, you can make your own backlighting mode using the REC1 and REC2 secondary functions on Print Screen and Pause respectively. For example, here I’ve done something that really lacks creativity, by lighting up only GND-TECH.

Here’s another one I did, that lights up commonly used gaming keys. Regardless, I don’t use either of these so don’t laugh at me.

Let’s not forget the pulsating mode, in which the backlight is enabled for all keys, and slowly transitions from minimum brightness to maximum brightness. Finally, here’s a shot of the keyboard with a matching mouse, the CM Storm Recon.

The Ducky DK9087 Shine II is a very impressive keyboard in pretty much every way. The build quality is excellent and the UV coated keycaps feel great. So far this keyboard is the most impressive I’ve used in terms of functionality, due to all of the innovative LED backlighting modes I’ve never seen before, made possible by onboard memory. It also has a detachable cable, Windows key lock, and NKRO, so it really has it all for a compact keyboard. Next up we’ll look at performance.

On this page, we’ll be testing the keyboard in various ways. First we’ll be testing key rollover in 6KRO and NKRO modes, to see if they are really true. Afterwards there will be a typing speed test, followed by my thoughts on how it feels during gaming sessions. So first up is the key rollover.

NKRO seems to work as well. This is great, since this keyboard has no PS/2 support. I learned the hard way.

Now for typing speeds, comparing it to the QuickFire Pro with Cherry MX Brown, and the rubber dome Logitech G11.

So I scored 88 WPM with the G11, 103 WPM with the QuickFire Pro, and 100 WPM on the Ducky Shine II with only 3-4 errors. These results are consistent; the mechanical keyboards always dominate the rubber dome, and the QuickFire Pro with its Brown switches always gets me a slightly higher WPM since I was able to mostly avoid pressing the key all the way down.

I also gamed extensively with this keyboard, playing mostly Skyrim, Ballsout: New Vegas, S.T.A.L.K.E.R. Shadow of Chernobyl, and Cry of Fear. There really isn’t anything new to be said here: I’ve reviewed two other compact Cherry MX Red keyboards, one of which also had Cherry stabilizers, so there’s nothing more to add. Mechanical switches feel so much better than rubber domes, since they are less mushy and provide more crisp feedback. They allow for faster double tapping due to their reduced actuation force and the fact that they actuate only half way down. Cherry stabilizers feel slightly less pleasant to most, but they aren’t as painful as rubber domes.

The Ducky Shine II is one of the finest keyboards ever made. With all the different variants available, you can’t go wrong. It excels in every aspect from build quality to functionality, and I really have no complaints for the keyboard itself. It’s nice to see an actual innovative keyboard these days. 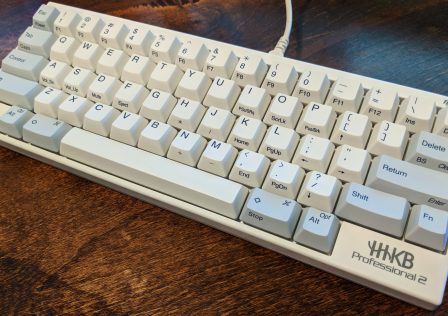 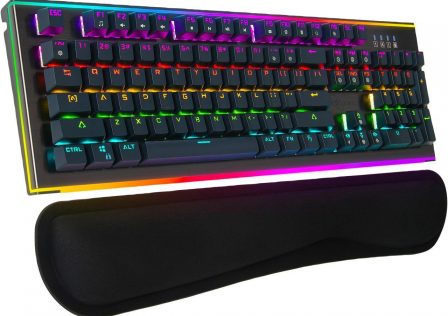 […] few years ago we reviewed the Ducky DK9087 Shine 2, a keyboard that received universal praise. Since then, many new iterations of Ducky Shine have […]