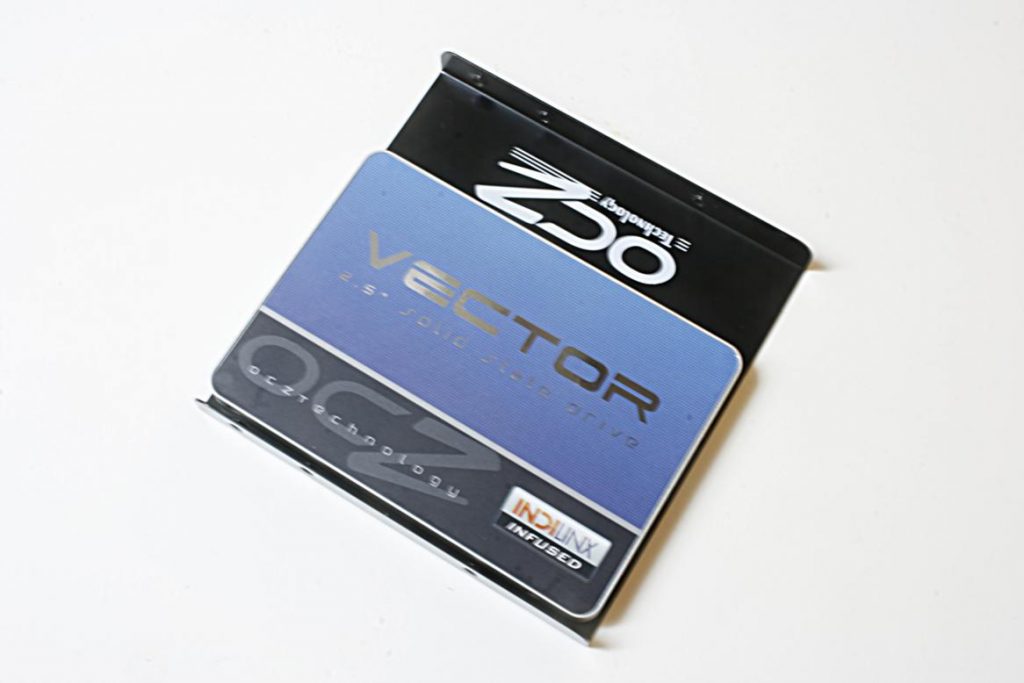 OCZ, ever on top of its game, has released another high performance SSD solution, the OCZ Vector equipped with its own, home-brew Indilinx Barefoot 3 controller. In the past, the SandForce controller dominated the OCZ lineup up until recently. The SandForce did not disappoint, so it will be interesting to see how exactly the Barefoot 3 controller compares. On paper, this SSD does not dissapoint. Sporting speeds of 550MB/s read speeds, and 530MB/sec write. This leads me to believe that OCZ made a good call switching to the new controller. However, time will tell as we get into the testing phase later on in this review.

Along with the upgraded controller, the Vector sports a brand new design including aluminum housing, slimmer size, and new artwork. In this review we will be taking a look at the 256GB model. Other sizes include 128GB, and 512GB.

We mentioned on the page prior that the OCZ Vector SSD is equipped with OCZ’s own in-house controller, the Indilinx Barefoot 3. This is no doubt the biggest difference when comparing the Vector with any other prior version, or any other SSD for that matter. We will discuss this controller in detail on the next page and hopefully answer some questions you may have especially the advantages or disadvantages over the SandForce controller. But one thing is for sure, from what we have found, an SSD is mostly limited by the performance of the controller.

The Vector is covered by a 5-year warranty.

Indilinx Barefoot 3 is the new controller which powers the Vector series SSD which is essentially the ‘brain’ of the SSD. We mentioned earlier that in the past OCZ has always used the SandForce lineup of controllers which worked very well with the success of the previous Vertex series from OCZ. However, to date, there is not a whole lot of information available about the Indilinx controller compared to the piles of info we have on the SandForce.

The Indilinx Barefoot 3 is controlled by two separate processors; the ARM Cortex processor, and the Aragon Co-processor. Caching for this SSD is powered by two chips of DDR3 from what we could tell. For this particular model, caching is set to 1GB. The 128GB model is said to only have 512MB.

The OCZ Vector SSD is packaged nicely featuring some nice attractive design work on the package exterior. Inside you will see that everything is bundled nice and tight, eliminating wiggle-room which could cause damage during shipping.

Upon opening the package, you’ll notice the SSD packed into its custom fitted foam shell inside an anti-static bag. Included also are your warranty information, a I <3 my SSD sticker, a mounting bracket for 3.5″ configurations and mounting screws. The SSD is tucked away in an anti static bag to reduce electronic shock damage. We have always been impressed with the level of care OCZ uses when packaging their solid state drives.

The Vector series sports a much improved design over the Vertex series. To date, all other OCZ solid state drives were made up of a plastic and metal housing. The Vector is in a complete metal housing giving it a nice solid feel. The corners are also rounded even further improving on the design. Lastly, the artwork on the top is much improved taking advantage of the entire top surface. Overall I was very impressed with the level of detail OCZ put into this SSD.

The reverse side contains a sticker all of the drives technical information. The four screw holes on the bottom are for mounting the SSD to the included metal bracket if you chose to mount this into a desktop in a 3.5″ drive bay.

Inside we find the single PCB with all the internal components installed. What probably stands out most is the Indilinx Barefoot 3 controller chip located right in the center. Surrounding the chip are all the OCZ branded NAND flash memory chips and cache.

Overall, I was very impressed with the quality of the Vector. For an internal component, the level of detail that went into the design is much more than I have ever seen before on any other SSD. Now that we’ve seen what we are working with, lets start crunching some numbers!

The OCZ Vector was tested in full SATA 6 mode using a supported motherboard to maximize the performance of the drive. To measure performance we used several benchmark applications geared towards measuring drive speeds or transfer rates. The applications include Crystal Disk Info, HD Tune, Atto Diskmark, Crystal Disk Mark, and HD Tach. The firmware for the Vector was updated to the latest version running 2.0.

The motherboard used was an EVGA Z77 FTW configured in full SATA6 mode.

Installing the hard drive is about as straight forward as it gets. When installing into a desktop, provided you don’t have a SSD mount in your case, the bracket allows you to mount the drive into any 3.5″ drive bay. From there it is just like installing a typical HDD into a computer. In a notebook scenario, of course installation will vary depending on what you are installing it into, but the Vector’s size and screw configuration will match whatever 2.5″ HDD you currently have in your system. So you should not have to worry about any hard drive incompatibilities.

For the read test, it looks like the Vector scored around 309MB/sec maximum read speeds.

Write speeds gave us a maximum of 371MB/sec. Below we have our random read and write speeds.

Using this test we were able to get the transfer speeds up to around 396MB/sec read, and 417MB/sec write.

Things are looking much better for the Vector here. Our read test maxed out at a whopping 552MB/sec, with read speeds clocking in at 510MB/sec.

The Vector not doing too well this time around with speeds averaging 280.1MB/sec.

Sequential read speeds proved to be the best with this benchmark measuring in at 509MB/sec and read speeds at 477MB/sec. For whatever its worth, AS SSD Benchmark gave us a final score of 1070 based on its total performance.So what do all the numbers mean? It’s hard to make sense of SSD transfer speed results from different programs because they are all… well different. Basically all this proves is what the drive can do under different scenarios. Each program benchmarks a little bit differently. Exactly how different we will never know. This is why we did not reach the Vector’s rated speeds of 550MB/sec read and 530MB/sec write. To achieve these speeds you need to hit a perfect set of circumstances under the right conditions. Maybe there is some other benchmark program out there that will hit that speed, but at this point, it is impossible to tell.

The OCZ Vector SSD with the Indilinx Barefoot 3 controller held its own in terms of design, build quality, and performance. Because of this I believe the Vector to be a solid buy for anyone looking for a high performance SSD. In our tests, the Vector’s write speeds were on par with OCZ’s claimed speed of 550MB/sec. We were not able to hit the rated speed of 530 MB/sec write, but many times benchmark tests are all circumstantial. But, overall the numbers were impressive and we are excited to see where the new Indilinx Barefoot 3 controller takes us with future products with OCZ.

MSRP for the Vector is $289.99 USD however, currently it looks like most retailers are selling them for around $269.99 USD. This price is a bit on the high side compared to its competition.

This SSD does exactly what it is suppose to do and does it exceptionally well.

[…] As with 99% of all other solid state drives out there, the Vector 150 fits the standard 2.5 inch form factor and a slim 7mm tall. The first thing we were glad to see was that the styling of the Vector 150 was similar to that of the original Vector drive. […]