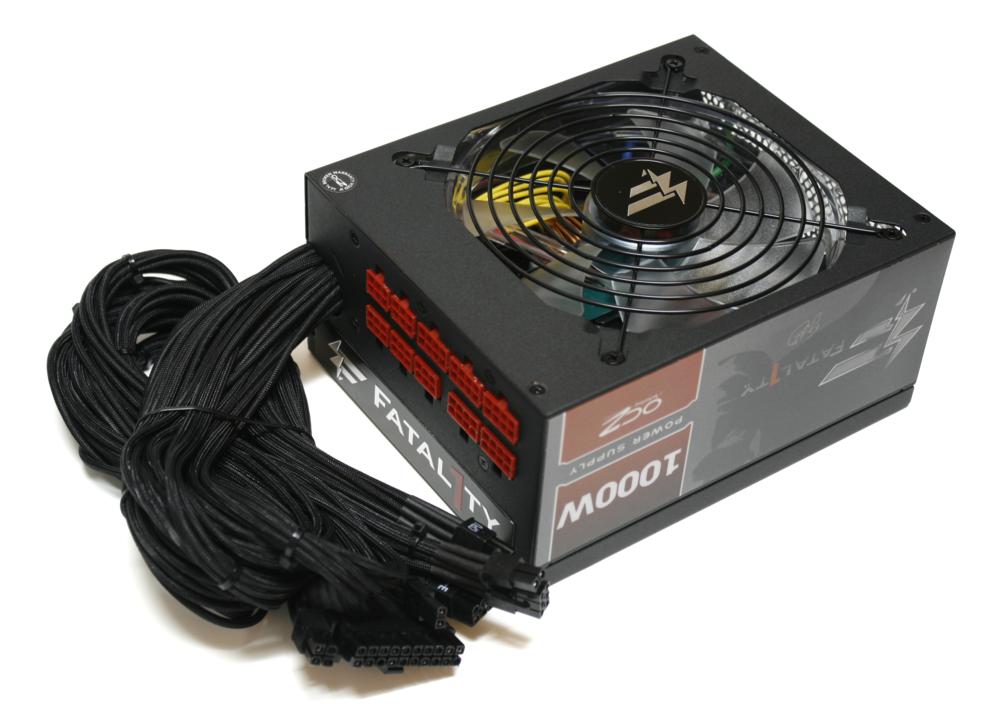 We’ve all heard the infamous Fatal1ty lineup of products, usually indicative of products that are a little more extreme, higher-end or gaming themed. OCZ’s new Fatal1ty 1000W PSU fits all three (model: OCZ-FTY1000W). To name the obvious, it’s capable of delivering 1000W of continuous power into your system. Not only that, it’s designed to do it well. This model is 80+ Gold certified, meaning it can hold a sustained efficiency rating of 90% under a typical (50%) load. A high efficiency rating not only means that it won’t draw as much from the wall when compared to a non-80+ compliant PSU, but we have also discovered that 80+ power supplies are much better built; its components are much more durable, thus increasing the lifespan of the power supply.

It’s obvious that the target market for this PSU is aimed towards gamers who are packing some high end, power thirsty hardware. Not just the 1000W rating gives this away, but the range of supported hardware is impressiveness. This PSU boasts 2x 8-pin CPU connectors along with 8x 6+2-pin PCI-E power connectors. Under typical circumstances, this unit does support up to four high power graphics cards, supporting both NVidia SLI, and ATI CrossFire.

There are many factors which determine a quality PSU which in this review we will be going overall of them, from cosmetics, to performance. With that being said, lets press on with the review!

Before we get into taking an up-close look at the power supply’s cosmetics, lets get a quick overview on what we are dealing with. First, as we mentioned on the previous page, the OCZ Fatal1ty 1000W holds an 80 Plus Gold efficiency rating meaning that it is rated at an outstanding 90% efficiency under a typical (50%) load. So what is PSU efficiency and why would anyone care how efficient a power supply is? Without getting into too much detail, efficiency in this sense is basically power in (from the wall) vs power out (to computer components). For instance, if you had a computer PSU that was rated at 400W, and is pulling 500W from the wall, then that PSU is 80% efficient. This is important for two reasons; one, a more efficient power supply will draw less current, meaning your computer will use less power. For the user running his machine at 100% constantly, will likely be shaving a few dollars a month off the power bill. This little amount will definitely add up over time. Second, a power supply with a high efficiency rating is likely built with higher rated components. Higher rated components can cause a power supply to run cooler and sometimes last longer.

Now, lets take a look at the detailed specs of this unit. The following information was taken from the official OCZ Product Page:

Below are the input and output ratings as photographed from the underside of the PSU.

Well, that on paper is about as detailed as we can get, now lets take a closer look…

To begin, we will start with the overall packaging of the product. The outside artwork of the package is nicely designed. OCZ did a great job summarizing the important attributes of this power supply. The reverse side contains more detailed information, including the input and output ratings.

Upon opening the box, the first thing you will notice is a rectangular custom foam insert housing the power supply. To the right is a bag which contains the modular cables. Once the top layer of foam is removed, the bag-protected power supply is now visible and can then be removed.

Upon removal from its protective bag, the first thing that came to mind was now un-modular this power supply felt. Of all previous power supplies we’ve had the pleasure of reviewing, this particular unit has the most permanently attached cables. These include the 24-pin motherboard connector, two PCI-E 6+2 pin connectors and an 8-pin CPU power connector. Mind you on 90% of high end systems, (which is what this PSU is designed for) you will be using all of these cable assemblies. However, the draw back is if you are in the market for a modular PSU strictly for convenience, this might not be your number one choice.

All-in-all, the design of the OCZ Fatal1ty 1000W PSU is top notch. The top fan grill is non-fixed giving it a “less cheap” vibe in my opinion. The rear exhaust grill is a high flow stamped honey comb design. The housing is a matte finish which has a semi-course texture to it. I prefer this as smudges and fingerprints don’t show up very well.

Here we have the modular ports and cable bundle in the image below. In addition to the non modular cables (24-pin motherboard, 8-pin CPU, and 2x 6+2 pin PCI-E), there are hookups for four more PCI-E cables, an additional 8-pin CPU connector, and 5x hard drive power connectors. (4-pin Molex or SATA power)

The image below shows all of the included hardware packed with the PSU.

Probably one of the most noteworthy cosmetics that the Fatal1ty 1000W has to offer is the braided power cables. Most power supplies on the market today have the cables all bundled together inside a braided sleeve. The cables with this particular PSU are each individually braided. There are some upsides to this but unfortunately there are some down sides as well. To get the negativity out of the way, the downside is the loss of flexibility. Not normally a major concern, but when it comes to tucking cables into tight spots to keep them hidden, it might pose a problem. On a more positive note, the cables look fantastic. When kept nice and neat, really help to give the inside of your case a nice clean custom look.

Last but not least, lets crack this open and take a look at the guts! As usual, the MOSFETs and regulators are impossible to see so no telling what those are without desoldering everything. What we can see though is a single large transformer, two large inductors, and two main filter capacitors. The caps are as they claim, 105C rated. With the cover off we were also able to take a peek at the 140mm fan which is a ball bearing model number HA1425H12B-Z. The power ratings for the fan are 12VDC at 0.5A.

Now that we’ve got a better idea of what we are dealing with, lets see how this baby performs!

The most important thing we look for is the behavior of voltage as the load on the power supply is increased. This comes in two forms. First, the actual voltage drop when load increases and secondly, voltage ripple. Voltage drop is important because when you see a drop, such as a dip below 12V, at mid to high loads, it can cause serious problems to internal computer components if the drop is significant enough. We will test this by incrementing the load up by 100W for 20 minutes at each step. We will run each 100W increment all the way up to 1040W. Now we know this PSU is rated at 1000W but there is a lot to be said for stability past maximum ratings. Although OCZ claims a 90% efficiency rating, we will also be performing our own efficiency calculations just to be sure. We will do this by placing a specific load on the power supply and then measuring the wattage going in to the power supply with our handy Killawatt meter. In addition to this, we will test the overall ‘quality’ of the unit by dropping the input voltage slightly below its rated value (100V AC). We will then measure the output DC voltage to see how it does under minimalistic operating conditions.

To provide a decent and accurate load, we used our own home brew power supply load tester. More info on this tester can be found on our unofficial page here:

Below is is a chart showing how well the OCZ 1000W PSU did during our voltage drop tests:

As you can see, the voltage drop was very minimal for this PSU. Even we took it to 1040W, there was no apparent drop indicating that this PSU was becoming problematic. So far so good! Lets move on to the efficiency tests. Remember Efficiency = Power Out / Power In.

The overall results show that this is indeed an 80+ Gold rated PSU! The ratings were good up until around 600W which dropped even further upon each increment. I did find it interesting that the efficiency actually increased running the PSU over it’s 1000W rating.

Lastly, We’ve got the voltage noise and ripple test, for this test, we maxed the load at 100% (1000W) and used an oscilloscope to measure the voltage ripple. Overall, the spikes and dips were quite minimal and brief. The largest voltage spikes were plus/minus 170mV. This level of noise is very minimal and well within normal operating conditions.

So how did it do? Well, considering the voltage drop was minimal, the efficiency rating was accurate, and voltage ripple was low, all in all, this is a quite solid power supply! If you are somehow able to load this PSU up to 1000W watts, you can rest assured that you won’t sustain any loss in internal hardware.

All in all, the OCZ Fatal1ty 1000W PSU is an all around performer when it comes to looks, functionality, durability, and most importantly performance. It is a well known fact that probably the most important component in any custom computer build is the power supply. A cheap, low quality PSU may work for a while (if at all) at its maximum rating, but in the end, it’s your components which will have to pay the price when things start to go bad. If you are in the market for a high quality PSU which is capable of providing clean, continuous power to your components, look no further than the Fatal1ty 1000W. Not only will the performance be fantastic, but the braided cables will give the inside of your case a nice, clean custom look which you won’t get from most other power supplies.

All in all, the OCZ Fatal1ty 1000W PSU is an all around performer