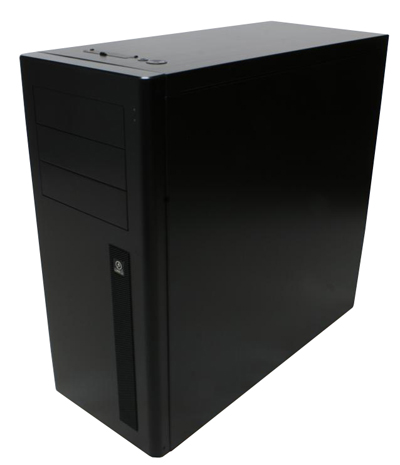 The lineup of Lian Li’s mid tower case arsenal continues to expand with its latest edition, the Lian Li PC-9N or in particular the Lian Li PC-9NB which is the Black model which we will be reviewing. Lian Li has a history of manufacturing cases with an almost meticulous sense of exceptional quality and design. This particular model at a glance features brushed aluminum exterior with a full metal aluminum interior. It fully supports ATX and micro-ATX motherboards on its new rail mount motherboard mount design which we will cover more in depth later on in the review. But lets not waste any more time! On with the review…

The Lian-Li PC9N was packaged typical to pretty much any case we have seen. The case is secured inside the box with two custom formed Styrofoam inserts to secure it during shipping. Overall we have found this method very effective and from what we could tell, there was no damage to the case due to shipping mishaps.

The exterior of the case is all black except for the very rear of the case which is silver (bare aluminum). At first glance, the case had a very solid feel to it. It didn’t make any sort of tension related noises when handling it and shifting it around. It was also surprisingly lightweight. Probably lighter than any other case of this size that we have reviewed (including the cheapy thin ones)! The brushed aluminum finish on the outside gave this case a very nice look which really gave the overall impression of quality.

The front of the case is probably one of my favorite so far probably because of how subtle and sophisticated it looks. The power and HDD LEDs are located towards the top right just above the three 5.25″ expansion slots. And as for the front of the case, all that is left is the vertical fan grill offset to the right with the Lian Li badge towards the top. Keep in mind that the front coolers are going to pull 100% of their airflow through that little grill. For slower quiet fans that are not meant to be heard, this is fine, however if you are the type of person who likes a ton of airflow, you will likely not getting much through the front. With the stock fan that is included with the case, the front grill size is more than sufficient.

The top of the case is where you would find your power and reset buttons along with your USB3 and 3.5mm headphone jacks. One interesting thing to note is that this case only features USB3 front headers. However, the smart folks at Lian Li figured some people might have a problem with this. So they included a USB3 to USB2 internal header adapter. As you can see in the images above, the USB3 and headphone jacks are hidden beneath a flip-up aluminum panel.

Moving onto the rear of the case starting from the top, we find the 120mm fan. What sets this feature apart from pretty much any other case I’ve seen is that this fan grill includes an actual removable grill instead of a stamped out pattern. Just below that there are two grommeted holes for water cooling. You’ll notice that when the grommets are removed, there is a gap between them and the fan. What this does is allow you to install an all in one (AIO) water cooler’s radiator to the outside of the case. Moving on down, we see eight vented expansion slot covers.

Additionally Lian Li’s attention to detail seems to know no bounds. As you can see in the above image, the removable thumb screws on the back of the case are equipped with rubber washers. This will help prevent damage to the nice external finish of the case.

Finally, below is an image of all the included hardware with this case.

Just as is with the exterior, the interior looks pristine. Probably the first thing everyone will notice when cracking open the case is the unique motherboard rail mount system which we will cover further down. The second thing that would likely go through your mind would have to be amount of room the inside of this case has.

First, lets talk about the latest feature included with this particular model, the Rail mount motherboard system. At first glance, I can see now why the case was so light. This system greatly reduces the amount of aluminum used. There are some advantages to this particular mounting style, but probably the most obvious is greater airflow to the back side of the motherboard. This will likely give you some very slight temperature drops for your motherboard components. Some other advantages are improved access to the back side of the motherboard as well as cable management.

Moving on, once again starting from the top, we find the rear 120mm fan. Both sides of the fan have a fan grill in place which just might save your knuckles one day. Also on the opposite end, we find the three 5.25″ drive bay mounts with Lian Li’s custom screw-less mount system.

Moving on down we find the removable 3.5″ HDD bay storage with the front case intake fan. Installing hard drives into the mounts requires you to remove the two removable thumb screws in front of the drive bays which will let you pull the whole assembly out. Once the hard drives are installed, they are completely isolated from the chassis metal because of the included rubber mounts.

And finally, just for informational purposes, here is a closeup of each of the types of aluminum used from exterior to interior:

The following components were installed into the Lian Li PC-9N for this test:

Installation for the components listed above was overall pretty straightforward. Installing the motherboard into the new rail system was no different than installing it onto a typical motherboard tray. The power supply mounted up flawlessly as well as most other parts. My only gripe has to be with the way the hard drives mounted into the 3.5″ housing. Removing the assembly to install the drives was a little more work than found on most other cases, and it would have been nice to see some sort of screwless assembly instead of thumb screws.

As a final not that won’t affect the score but I think is worth mentioning is the extremely awkward cable management tactics you will need to use to hide your wires in this case. I found that this is due to the fact that because this case is so open and so minimal on internal aluminum paneling, there is nowhere to hide anything! So conventional cable management tactics need to be re-thoughtout in order to make your CM job look decent.

The Lian Li PC-9NB turned out to be an extremely functional, well designed case. The unique motherboard rail mount system was a positive move for Lian Li which will hopefully result with more cases with this type of mounting system. The over all build quality, and the quality of materials used was another positive point and something we are starting to get use to from pretty much all Lian Li cases.

This case falls into the mainstream, or mid-range category of cases which is pretty typical of most mid tower cases. So price will play a huge role for those in the market for a case such as this. The MSRP for this case is $99.99 which for a high(er) end mid tower case, I would say it is justifiable by the features the PC-9NB offers.