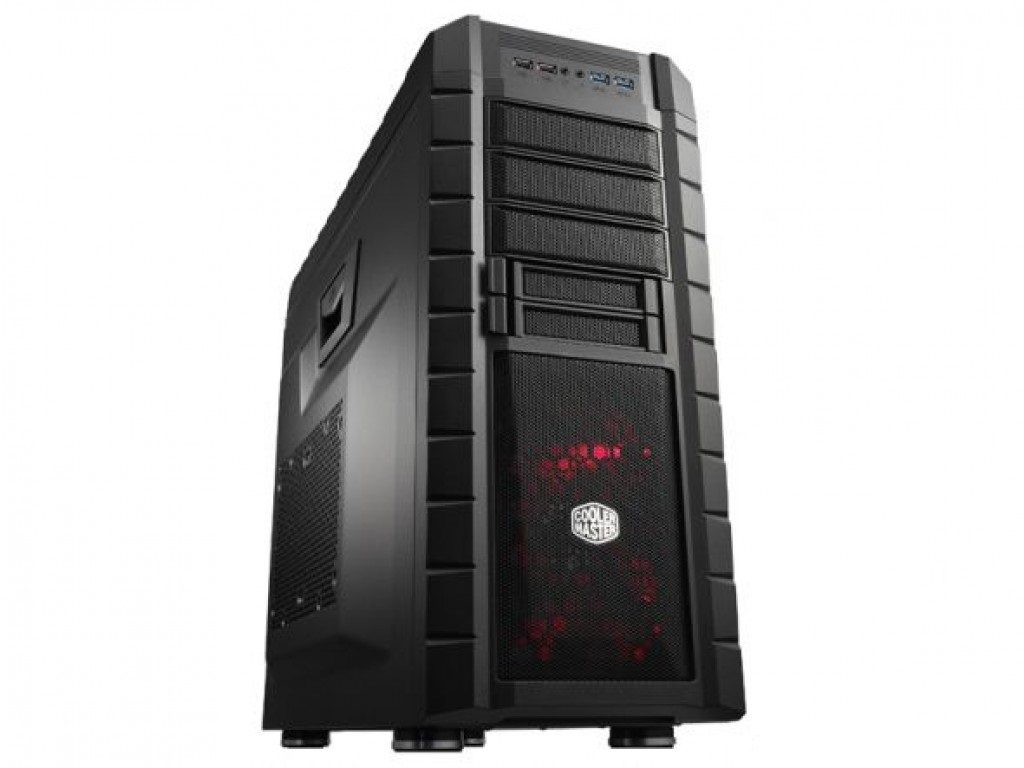 Cooler Master has recently released the little brother to the other members of the HAF lineup, titled the HAF XM. The HAF series has been around a few years, and since the start, Cooler Master has been releasing several revisions based on the design of the original HAF case. All of the products in this series are geared towards gamers, overclockers and PC hardware enthusiasts. They are known for for their abundant features and high quality. So before even starting the review, at first glance, we have high hopes for the HAF XM. But lets just see if it lives up to the name.

Supposedly, according to Cooler Master this case falls in the mid tower category, but looking at the product dimensions, this is probably the largest mid tower case on the market, measuring larger than other full tower cases ( 9.9 x 20.9 x 22.8 inches). Regardless of it’s size, at first glance this case seems to pack almost every feature we could think of including internal support for a 240mm radiator for all your water cooling needs.

Just by looking at the list of features, it is obvious that the HAF XM lives up to the reputation set by the other cases in the series. Below is a list of features provided by Cooler Master.

HAF XM – a “mid tower” version of the HAF X, which comes with full tower features for PC enthusiasts. It supports up to four 200mm fans to keep constant cooling while housing high-end components, such as AMD Radeon HD 7970 and NVIDIA GTX 680. It also supports up to 9 HDDs and 8+1 expansion slots for 3-Way SLI/CF. The smart design of latch on side panel and sliding PSU cable cover ensures the convenience and neatness of system building. Additionally, HAF XM is equipped with two USB 3.0 ports for faster data transfer.

The overall look of the case has that same militaristic design that we find on the rest of the HAF series. This should appeal to gamers or enthusiasts who want a more subtle look, without the need of large side windows and flashing lights. Just like its big brother, the HAF XM’s exterior is made up of plastic coverings and lots of mesh grills for cooling.

Here is a view from the right side/rear of the case. One subtle feature that we thought awesome was the bulged side panel. This really comes in handy if you’ve got a lot of wires to cram behind the motherboard tray.

As you can see the front of the case is very similar to Cooler Master’s original HAF case. At the top we have the IO ports, two USB 2.0, two USB 3.0, and sound/mic for your headset. Below that there is room for three 5.25 inch drive bays. Just below that there are two removable 3.5 inch hard drive bays. We will go over this feature more in detail on the next page. Underneath the plastic front cover you have access to the 200mm fan mounted in between the frame of the case and the hard drive bays.

The rear of the case is pretty standard. You can easily see that the PSU is bottom mounted. There is also water cooling support and an included 140mm fan. The expansion slots come fitted with vented slot covers to maximize airflow and are configured in an 8+1 configuration which can support up to three full size graphics cards.

The top plastic shroud is easily removed with a single thumb screw located on the back of the case. Underneath we have one 200mm fan with support for one more the same size. Now, if water cooling is your thing, it gets better, the shroud is deep enough for you to mount a 240mm radiator in place of the fans.

Unlike most traditional cases, the HAF XM’s side panel uses a latch system similar to that of the Corsair 600T. This makes gaining access to the inside of the case much easier opposed to the typical two thumb-screw method. The photo below shows how the side panel folds down once the handle is pulled. Also pictured is the reverse side of the side panel.

The inside of the case is painted black which seems to be the new standard now days. Some of the more obvious features include a large port on the motherboard tray which allows access for removing CPU cooler mounts. We also see rubber grommets for cable management. All the drive bays are screw-less. Towards the bottom there is a PSU cable should strictly for cable management. This helps hide all those ugly cables coming from the back of your PSU.

As mentioned before the HAF XM comes with two front mount remove HDD slots which can secure either an HDD or an SDD. This is mostly for convenience purposes only and does not magically make your hard drives hot swappable. Most modern motherboards have the option to switch SATA ports into E-SATA in order to make them hot swappable so be sure to check first.

Another unique feature is the ability to remove three of the hard drive slots. This may come in handy when dealing with incredably long graphics cards, or just freeing up space in general.

As you would expect, installation is pretty straight of the hardware components is pretty straight forward. Cooler Master was kind enough to supply you with all the screws, standoffs and even zip ties that you will need for installing your components. The already included cables such as the front panel connectors as well as fan connectors were nice and long which made hiding them easy.

IT was really hard trying to find many cons for the HAF XM. The overall construction is solid inside and out and this case definitely packs enough features to make it equal with the rest of the HAF lineup. The case has an endless amount if features that should keep any hardware enthusiast or gamer satisfied. The only thing that set us back was the size. Cooler Master claims this is a mid tower case, when clearly it is the size of a typical full tower case. If you are in the market for a mid tower case due to size restrictions, this may not be for you.

IT was really hard trying to find many cons for the HAF XM.

The overall construction is solid inside and out and this case definitely packs enough features to make it equal with the rest of the HAF lineup. The case has an endless amount if features that should keep any hardware enthusiast or gamer satisfied. The only thing that set us back was the size. Cooler Master claims this is a mid tower case, when clearly it is the size of a typical full tower case. If you are in the market for a mid tower case due to size restrictions, this may not be for you.