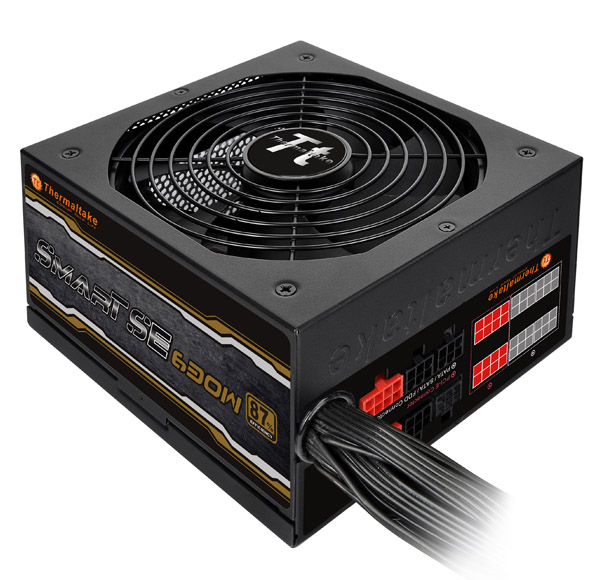 In November of this year, Thermaltake announced the release of a new lineup of affordable power supplies with the idea of delivering clean power coupled with features that make the unit run very cool and quiet. The SMART series by Thermaltake is newest addition to its PSU family, and designed to provide “just the right power”, which in other words means, cost-effective PSUs with proper connectivity. In this review we will be taking a look at the Thermaltake SMART 630 Watt PSU (SP-630P) which is designed for entry-level single or dual-GPU systems.

SMART Series Power Supplies are for those who are upgrading, repairing or building a system and want a power supply that just works. Many power supplies can be offered with unnecessary or inflated features that do not benefit the everyday web surfer or gaming system. SMART Series power supplies are tested on live fully functioning systems to ensure the best compatibility with actual system components. This translates into a better user experience and a power supply offering that is designed to work and work well.

The SMART lineup comes in modular and non modular flavors depending on your needs. The non-modular SAMRT PSUs are equipped with a single 12V rail, active PFC and are according to Thermaltake, 80 PLUS certified, offering up to 86% efficiency at 20-100% load. Now I know what you are thinking: If the PSU is rated at 86% efficiency, why is it not 80 PLUS Silver? Honestly, we can’t find the answer. Our best guess is that 86% efficiency is probably the very best case scenario and is not common. These units also come with a 120mm cooling fan with intelligent speed control.

Below are the general features and specifications of the SMART 630 Watt PSU provided by Thermaltake.

The following chart outlines the current and wattage ratings for the PSU. As you can see, you can expect to get at total of 540 Watts on the +12V rail, and 130 Watts on the 5V rail.

Below are the protective features that are included in this PSU.

Below is a table of the types and quantities of the cables bundled with this PSU.

Eco Friendly Specifications:
It’s obvious that Thermaltake has put a lot of focus into the SMART series’s ability to cut down on energy costs. Here we find the supported energy-saving related features found in the SMART 630W.

New Thermaltake SMART 630W saves energy through its high energy efficiency of up to 80% and is 80 PLUS® certified.[/COLOR]

• Corresponds to the EU directives on WEEE and RoHS:
Thermaltake considers its full impact on the environment during manufacturing and maintains green facilities to ensure Thermaltake SMART 630W meets WEEE & RoHS requirements.

Packaging for the PSU was unimpressive to say the least. It was basically put into a box with the cables off to one side with the manuals underneath it. There were no custom foam cushions to prevent shipping mishaps. Given the size of the box, there really is not a whole lot of wiggle room for it to move on it’s own, but it would have been nice to see at least some internal packaging material to keep it safe.

Included with the SP-630P are the PSU itself, a power cable, and a manual with warranty information. Pretty basic, but honestly what else would you expect… cake?

And here are some additional detailed pictures of the unit itself.

The surface of the PSU is power coated with a black paint finish. The fan is covered by a wire fan grill mounted on the inside. The air exhaust on the back of the unit is an efficient stamped honey comb design. Another noteworthy mention is the sleeving of the cables. The only sleeved cable is the 24-pin motherboard cable. All the others are exposed which to be honest really degrades the overall look of the drive. The overall length of the cables are quite good except for the 4-8pin CPU power cable. If your case is configured for a bottom mounted PSU, you may have a difficult time either getting it to reach, or hiding it.

A Closer Look Inside

A power supply may look great on the outside, but deep down, it’s really the inside that really matters. Disassembling the PSU was pretty straightforward. There were a total of forum screws, two of which were located under the side graphic sticker. Please be aware, however, that by dissembling your unit WILL void your warranty with Thermaltake and is not advised due to the dangerously high current contained.

First up for inspection was the main cooling fan which is a Thermaltake TT-1225A 120mm x 25mm fan. This particular fan has a rated speed of 1400 RPMs, which produces 41.6 CFM, at 21dBA. Thermaltake has included a smart fan feature which will cause it to throttle down depending on load.

Next up is the main filter capacitor. Nothing really special here and no surprise for a mid range PSU of this price range. This particular cap is rated with a capacitance of 330uF (microfarad) with 85C as max operating temperature.

The rest of the internal parts are pretty typical of what you might find in a standard PSU. Below are some other internal pictures for your reference.

From what we could gather, the overall quality of the parts used was pretty standard. Nothing high end, but nothing cheap, however. The theory, “you get what you pay for,” is pretty much the perfect summation of the overall internal quality of parts used.

Our tests were simple: simulate real world conditions, by placing load on the device. Power will be dawn by a high end gaming computer with the specs detailed below. Under maximum load, we were able to draw a total of 605W out of the wall during tests. To get the most out of the system, we used a combination of an intel Linpack torture test on the CPU, and ran the stress test: Furmark on the GPU. Voltage will be monitored during various scenarios by way of a multimeter. Also during the tests, the total power draw coming from the PSU will be measured using a Killawat meter.

Before we hooked anything up to begin testing, we powered on the PSU with no hardware attached. The purpose of this test was to see how the noise level was under idle conditions. When the PSU powered up, it was completely silent. Good news so far, but there is no telling what will happen once a load is placed on the unit and things start heating up.

After checking for noise levels, the unit was installed into a test system. One interesting thing we noticed was the “cheater” plug system that was used to provide power to the graphics cards, it’s basically two PCIE connectors coming out of one wire (1x 6-pin, 1x 6+2-pin). Below is an image of what it looks like. I can see some good and bad to this configuration. The good is that when it comes to cable management, hiding one wire is a lot easier than hiding two. The down side is that this could cause strain on select components inside the PSU. This may or may not be the case, however, due to the fact that this is only a single rail PSU.

Overall the Thermaltake SMART 630 Watt PSU tested very well. During idle tests, the unit registered at 12.30V on the +12V rail, and 4.9V on the +5V. Once a load of 605W was introduced, the voltage on the 12V rail dipped down to 12.14V and the +5V rail had no significant change. Some more good news, despite the heavy load placed on the PSU, the amount of noise coming from the unit, had hardly changed. It was now hardly audible as compared to before when it was completely silent under zero load.

We let the system stew overnight under full load conditions. This test lets us verify that the PSU can handle sustained power draw over long periods of time. 12 hours later, we were pleased to find that, while the rest of the system was blistering hot, this little PSU was chugging along just fine.

In conclusion, keeping in mind that the Thermaltake SMART series is not considered high-end, it did quite well during our tests. What it makes up for in performance, however, it lacks in pretty much any other features. The SMART 630W is non modular, all but one cable is unsleeved, and it looks just plain. But, if you are in the market for a power supply, that doesn’t have any of the bells and whistles we typically see with today’s PSUs, this just may fit the bill perfectly for you. The SMART 630W by Thermaltake is for those who want a power supply that will perform quietly in the background while allowing the hardware to comfortably do its job. It runs cool, and it runs quiet, so honestly if your needs fit the scenario above, this may just be the PSU you are looking for.

One thing that we just can’t look past, however, was the disappointing packaging methods. This PSU is literally set inside a box, with a few other items, and shipped out. Space in the box is tight, so it’s not going to move around too much, but it would have given me a little bit more piece of mind seeing some kind of packing material inside the box itself.

Overall, for the price you pay, you don’t get a whole lot of features, but the PSU as a whole is well worth the money.