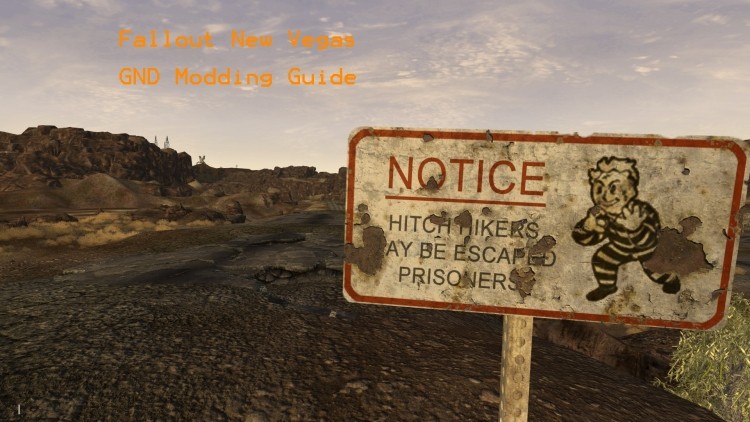 According to Steam, Fallout New Vegas still has thousands of active players every day. With those statistics, we decided it would be smart to give everyone a list of essential mods to download. Keep in mind that many of the mods listed here require most if not all of the DLC, so be sure to get them!

These mods will make your game look better, play better and just add loads of new content. To see some gameplay with these mods in action, look here.

Here are some initial tips…

Since the engine is identical to FO3, the console commands are the same. I’ll just copy everything from the FO3 guide here.

The console is a command prompt that lets you use developer-like functions. The default key for this is the tilde key, which is above TAB and below Escape. All the good stiff is listed here, but I’ll list some important things that most people would be interested in.

Just enter the bolded command listed below, and a value which I’ll explain right after it.

You need a mod manager for this game, ideally Mod Organizer 2 which leaves your core game intact so you can’t break it by installing mods.

The Mod Configuration Menu – This mod lets you customize other mods, and enable/disable features with them. Many of the mods listed in the guide require this and NVSE which is listed above.

lStewieAl’s Tweaks – Tons of quality of life and gameplay options which you can enable and disable at will.

Console Paste Support – Lets you paste text and improves console usability in a few other ways too.

DSOAL – This is a wrapper for DirectSound3D. The game has an incomplete buggy implementation of DirectSound3D that’s not used by default, but this converts it to OpenAL and seems to fix the issue. It’s not only for headphones either – by modifying alsoft.ini you can enable surround sound support as I do.

These mods are modifications that will enhance the graphical fidelity of Fallout New Vegas. Fallout New Vegas isn’t a very demanding game, but when using this many graphical mods it can become quite stressful on even top end GPU’s. You might want to check and see if SSAO is enabled like in our Fallout 3 guide. Make sure Ambient Occlusion compatibility is set to the Fallout 3 profile. Now let’s look at the mods:

NMC Texture Pack – Even potato PCs can handle the LARGE one.

New Vegas Redesigned 3 – An extremely detailed overhaul for character models, a must have.

Weapon Animation Replacer – New weapon animations and this is needed for Weapons of the New Millenia.

Bornagain Book Of Water – This is a mod that compiles all of Cabal120’s retexture work. He has 2 packs, one with all his armor retextures and then another with mutant retextures.

EVE – Essential Visual Enhancements – EVE is one of the most well made and most beautifully crafted mods I’ve found for New Vegas. It’s a mod that adds tons of new particle effects for laser/plasma weapons, new impact effects, and even retextures a few weapons.

IMPACT – Ballistic VFX overhaul, not much overlap with EVE.

This section will list a collection of mods that improve or alter the gameplay of Fallout: New Vegas. Nothing here is too drastic, such as Project Nevada. I tend to stay away from huge overhaul mods.

JSawyer Ultimate Edition – Reimplementation of Josh Sawyer’s own mod, the director of Fallout: New Vegas. It includes cut content, some balance changes to make for more hardcore gameplay and role-playing, and more.

A World of Pain – This is the most amazing mod for New Vegas, adding tons of new locations as well as new factions, new quests, and new weapons. Many of the locations added are some of the most interesting ones in the game.

Weapons of the New Millenia

Millenias Weapon Collection – This isn’t a single mod, this is MANY mods. I’ll be linking to his profile where you can find 6 pages worth of new weapons, retextures and more! Only download the ones released AFTER Weapons of the New Millenia mod, since it includes all previous works.

Colt Rangemaster Hunting Rifle – Classic Fallout Weapons fails to implement this classic Fallout gun, so this mod does it for us.

This mod adds loads of new mutants to the game and even increases the spawns around the wastes so you’re in for a challenge if you download this mod! Note that this mod adds lore unfriendly creatures like Terminators and Xenomorphs from the Alien movies. So after you install it, add this file to your data folder (overwriting the one that’s there) to remove them. If I missed any, delete them with FNVEdit which is a straightforward, self-explanatory process.

To launch the game with these mods, launch NVSE through your Mod Manager. Your mod manager may use its own INI files, so the graphics/control/game settings you set might not apply this way, so you’ll have to redo them.

NVIDIA users can enhance the visuals further with HBAO+ (ReShade MXAO breaks). This article shows how. The 0x00000005 flag is recommended (Call of Duty: World at War) over the official one.

What specs do you think would be required to run F:NV with this mod list?