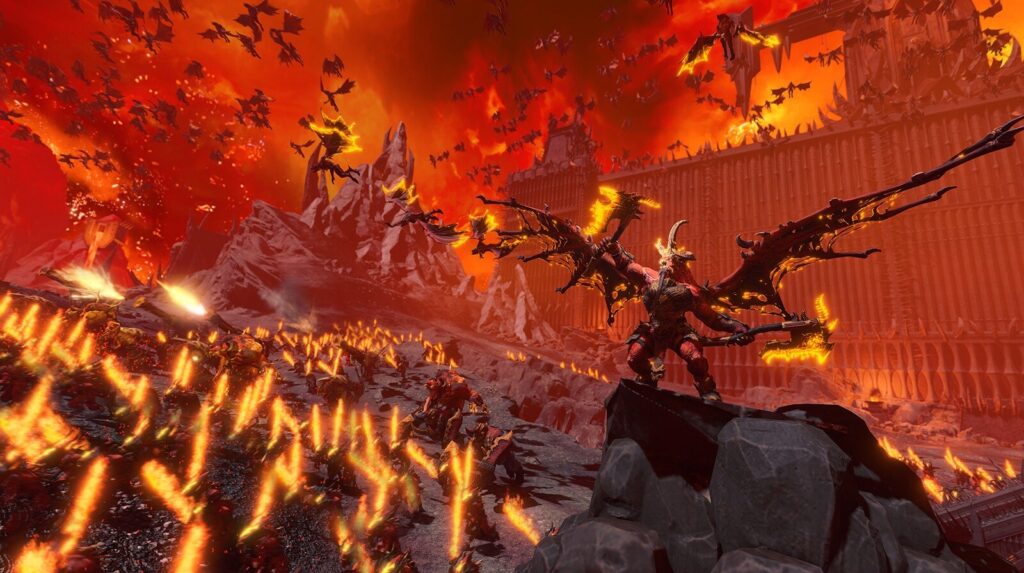 Total War: Warhammer III is a game many of us were anticipating. Personally, I was most eager to experience the game after its Mortal Empires and faction DLC updates, integration with content from the previous games, and I was really looking forward to playing this game with the massive engine improvements shown in A Total War Saga: TROY – namely multithreading, which results in Troy running up to several times faster than other DX11-later era Total War games.

The biggest problems with this game’s release aren’t bugs, nor is it the upcoming blood DLC which is stupid but nothing new. The biggest problem is not even Denuvo, which according to some reviewers who had pre-Denuvo versions of the game, causes significant performance penalties.

Warhammer III is not the buggiest release ever, but in my > 20 years of gaming I have never seen a new mainstream game lower the bar this much technically. The predecessor to this game, Warhammer II, is barely multithreaded like most games, so the performance is terrible in large battles, and still sub 60 FPS in moderately sized battles at 1440p and above on any system.

On the other hand, Troy features significantly improved multithreading, with even 12 core/24 thread CPUs delivering considerable performance benefits over 8 core/16 thread models. As a result, on my Ryzen 9 5900X and RX 6900 XT PC, battles tend to run between 80-100 FPS in Troy, compared to 30-45 FPS in Warhammer II on Ultra settings at 3840 x 2160 resolution.

So Troy brought massive engine optimizations to the table, yet Warhammer III seemingly fails to incorporate all of them. CPU utilization is WORSE than that of Warhammer 2, with occasional huge spikes in CPU usage and simultaneously GPU utilization dropping to 20-30% in battles. Let the numbers below speak for themselves: 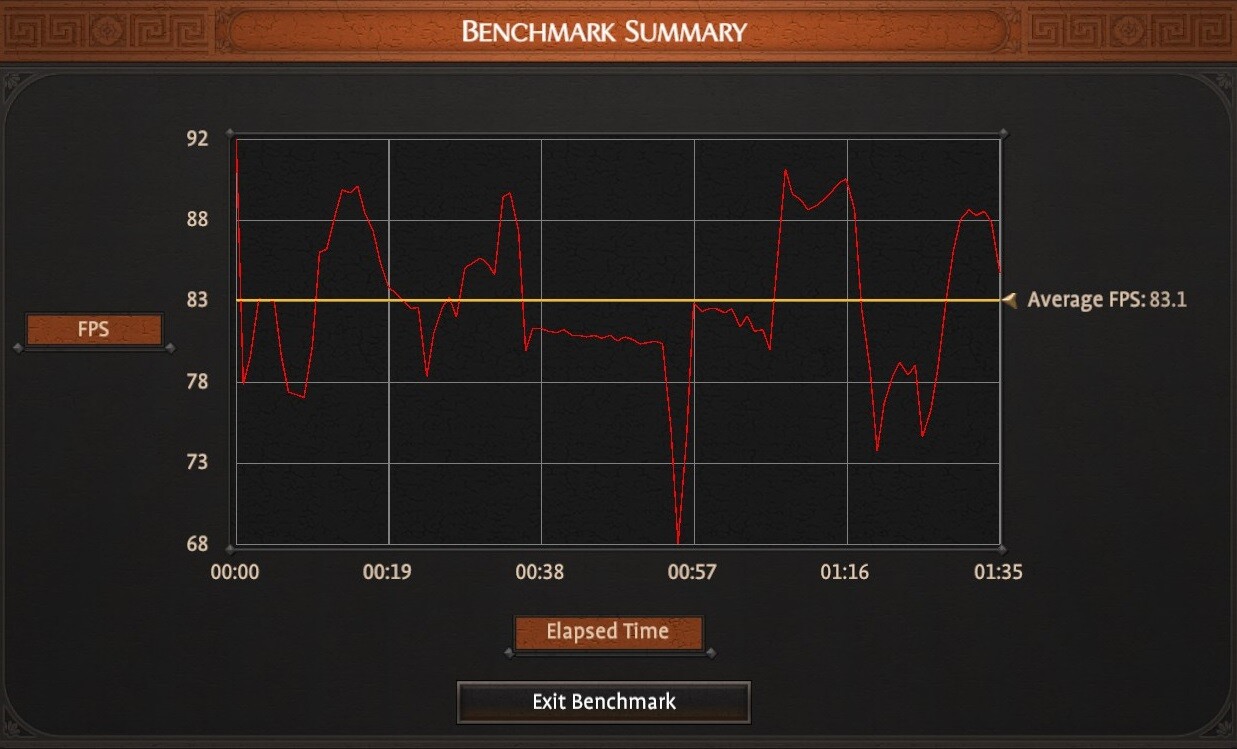 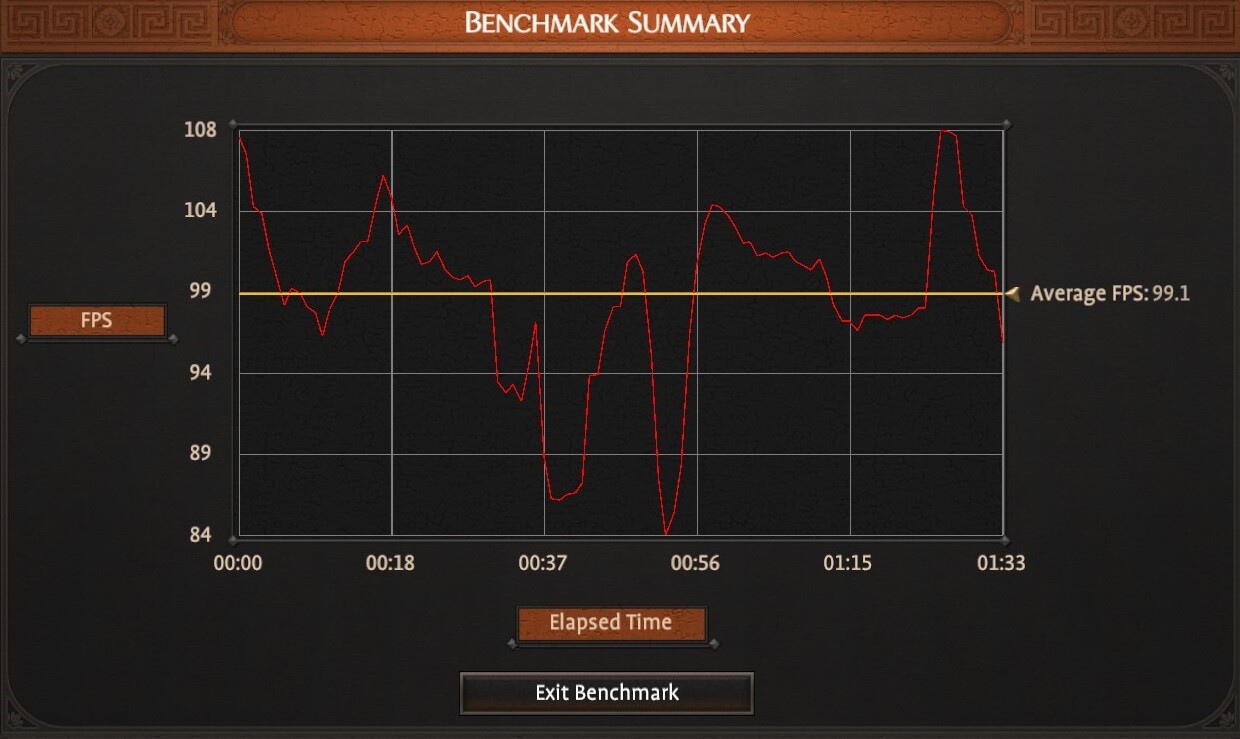 The top image above is from Warhammer III’s battle benchmark, the middle image is from Troy’s battle benchmark, and the bottom image is from Troy’s siege benchmark. Well over a 100% performance difference between the two battle benchmarks, in favor of Troy which is the older game. These benchmarks were run on equivalent settings – Ultra settings, Extreme unit size, no V-Sync or depth of field or vignette, the main difference being Warhammer III uses TAA (not a great implementation either) while Troy uses FXAA, but that isn’t the main contributor here. Troy’s map even has more vegetation, and it has water. Troy runs so much faster because of multithreading above all.

It gets worse than this for Warhammer III: like the previous games, its frame rate will drop to the single digits, even under 1 FPS at times on all systems, in battles consisting of > 4,000 troops. Troy on the other hand can run the maximum of around 8,000 units at 75-90 FPS on my system, with frame rate drops only occurring when zooming out all the way and looking straight down on all the units.

That’s not all though; let’s compare the campaign map benchmarks now. 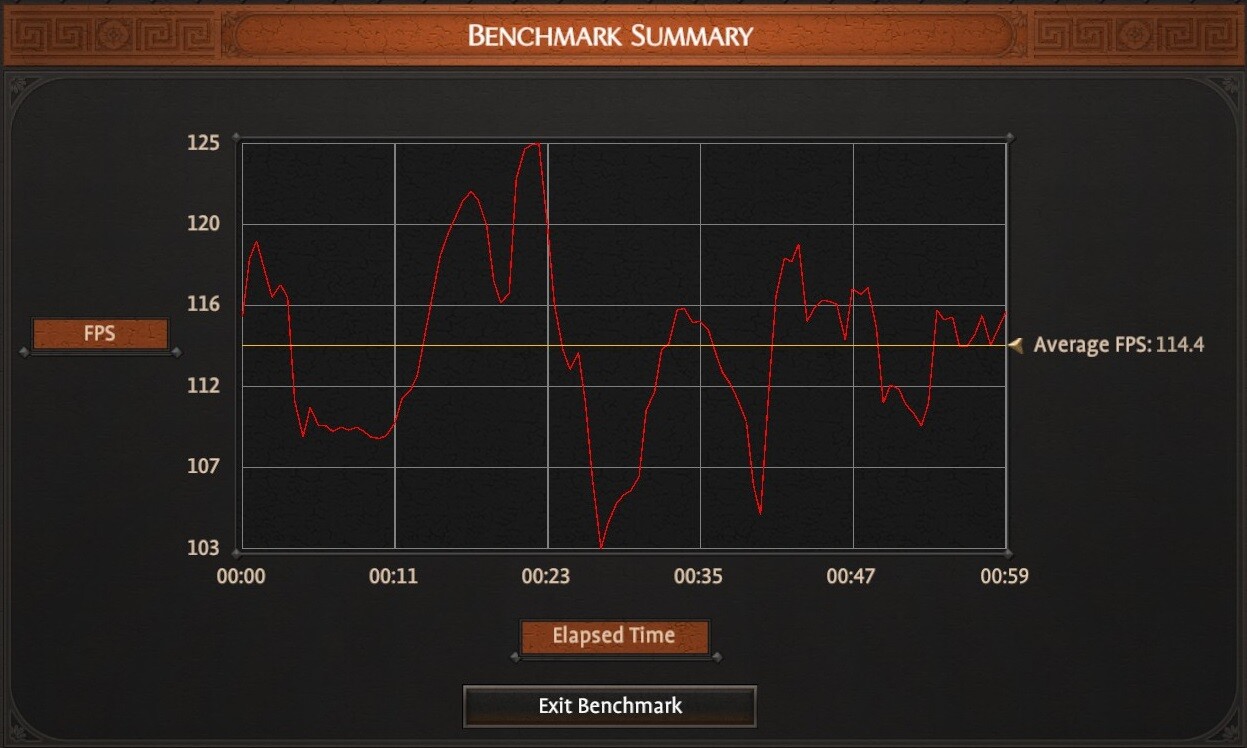 Once again we have Warhammer III in the top image and Troy in the bottom image. Troy’s campaign map runs nearly 4x faster! And no, Warhammer III performance deficiencies here are not caused by overclocks, out of date drivers or unclean driver installations, they are caused by the game barely being multithreaded and having additional CPU and GPU utilization issues.

Why does Warhammer III seemingly not incorporate Troy’s multithreading, a game which released in 2020? Even worse, it seems it has been discovered that Warhammer III’s engine is even older than the current build of Warhammer II! Can you imagine that? Can you imagine the next Battlefield game using an older engine than Battlefield 2042? Same for any other game. This is not the norm in the gaming industry, this is CA lowering the bar to unprecedented levels.

This would be like a new DOOM or Wolfenstein game coming out on id Tech 5 rather than the latest id Tech 7 or something even newer and better (amusingly enough, id Tech 5 is better threaded than the vast majority of game engines today). Or it would be like Fortnite 2 coming out and using Unreal Engine 3 or 4 rather than Unreal Engine 5. We would love to hear the reasoning behind this from Creative Assembly.

I have never seen the bar lowered this much for software development in gaming (hence the title of this article), but if anyone has seen something like this or worse, feel free to point it out. Cyberpunk 2077 may have been buggier at release, but it didn’t lower the bar for software development in gaming like Warhammer III does. Cyberpunk’s engine is undoubtedly a better version of The Witcher 3’s engine, the game just wasn’t ready when it was released. Elden Ring also has massive performance issues not seen in its predecessors, but the engine has other significant visual improvements, so that was more of a one step forward and two steps back situation, rather than Warhammer III’s massive dive backwards.

Warhammer III on the other hand appears to have just been built on top of Warhammer II’s engine, with a few new graphics settings added on top. Why on earth didn’t they build the game on Troy’s engine? If compatibility is a reason, then why would Troy’s engine introduce such massive compatibility issues when the game is so similar? That would be indicative of even more bad software development practices.

We seek not white knight Gamer responses, but a response from the Creative Assembly would be much appreciated.