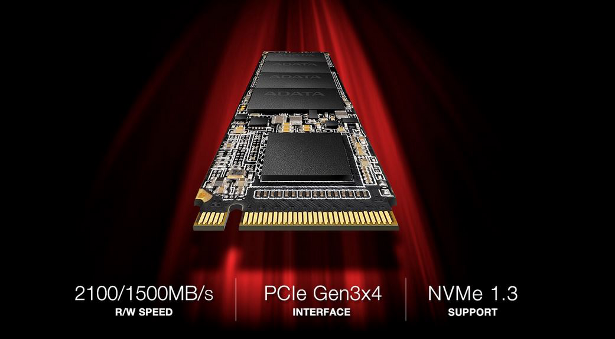 ADATA has just announced the launch of its newest addition to the XPG lineup of SSDs namely the XPG SX6000 Pro PCIe SSD. The new SX6000 Pro is foot-printed in the Gen3x4 M.2 2280 platform and it features NVMe 1.3 technology. The new SSD also is configured to take advantage of 3D NAND flash, a type of flash memory in which the memory cells are stacked vertically layer upon layer. This offers higher capacity in a smaller space.

The new XPG SX6000 Pro SSDs will be configured in a single-sided design and will be configured in 256GB, 512GB and 1TB capacities. The small, slim design will also help cut costs giving the price to performance factor over these drives an advantage over its predecessor. Speeds for the new SSD are outstanding, offering 2100MB/s read and 1500MB/s write speeds and seek times of 250K IOPS read. Longevity-wise, the XPG SX6000 Pro is designed to last. It features SLC caching for durable load distribution which will greatly improve the SSD’s response time and overall life cycle in high usage environments.

Pricing and availability for the SSD has not been announced but will be released later next month.

[…] couple months ago ADATA added a few new M.2 solid state drives to its enthusiast brand, XPG. This included the XPG SX6000 shortly followed by the XPG SX8200 a few weeks later. In this review we will be taking a closer […]

[…] couple months ago ADATA added a few new M.2 solid state drives to its enthusiast brand, XPG. This included the XPG SX6000 shortly followed by the XPG SX8200 a few weeks later. In this review we will be taking a closer […]