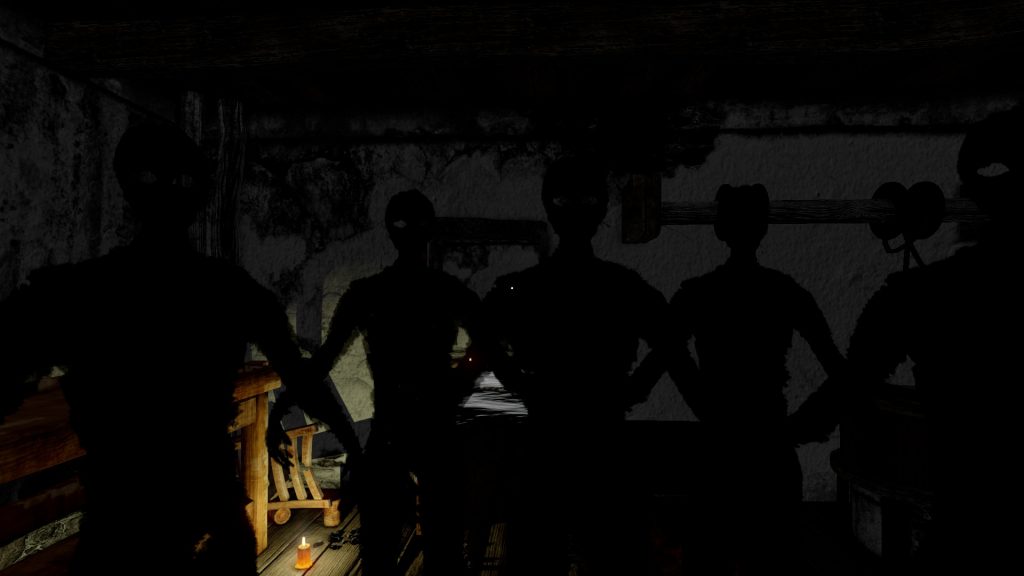 With the somewhat recent revival of the horror genre, we’ve decided to take a look back at the ten scariest moments in video game history: situations that were the most tense, and brought the most fear to the player. There are many ways to achieve this, and we look back at some of the most impressively crafted horror experiences of all time, from the original Silent Hill games to more modern horror games like the Amnesia franchise.

We didn’t have any specific time constraints for our entries. Some of them are momentary, while others may occur over a much longer period of time. If you don’t want spoilers, and want to experience horror games to their fullest potential, do not watch the videos. You can just look at the games listed, and pick them up for yourself.

It was a close call, but Doorways: Chapter 1 starts off the list, specifically the basement of a psychopathic killer. It was used as a torture lair. The atmosphere is incredible; the set pieces, the detail, the sounds, it’s just so creepy and you feel really vulnerable and on-edge.

A number of candidates fought over this spot, but in the end we decided to go with the first encounter with Igor in Underhell chapter 1. This free mod is actually one of the best games of 2013, and it’s very strong in both survival horror and psychological horror aspects. This scenario is a survival horror sequence. Igor doesn’t show up until the 18 minute mark, but the entire video below is very impressive. The whole area is filled with dozens of what can easily be described as “zombies”. Dozens of fast, running zombies in a compact dark space? Topped off by an encounter with an unstoppable boss fight? All while you’re outnumbered and dangerously low on supplies? Sounds good to me. Or bad… depends on how you look at it.

Once again it was a close call, but Miasmata has claimed our eighth spot. Or more specifically, the first encounter with the unstoppable creature inhabiting the island. And no, it’s not a smoke monster. See for yourself around the 4:30 mark, though watching the whole video builds up the suspense much more. Though if you haven’t played the game, you’re better off getting it and experiencing it for yourself.

What makes this scene so well done is that it’s totally dynamic. There are no scripted encounters with that creature at all, and Miasmata is a large open world game. It’s stalking you, and you’ll never know when or where you’ll encounter this beast. The first encounter is the scariest, and that’s what makes the list.

For me, I didn’t know what the creature looked or sounded like. I only knew that it existed and that it was somewhere. I had already played several hours of the game without seeing it, but out of nowhere it appeared. I knew I was in trouble and that I couldn’t escape, so I did what I could…

And, much like the previous entry, you can’t fight it at all. You’re powerless to such a predator.

Some creepy hallways in Cry of Fear make the list at #7. This is a free 15-20 hour psychological/survival horror game, made by the same people who made Afraid of Monsters. It was originally a mod for Half Life, but its quality and popularity (reaching well over a million downloads quickly) let it see the green light.

This is a rather quick part of the game, unless you freeze up and choke. It takes place shortly after fighting a boss, which was a very large… figure that wielded a chainsaw. First, view that scene.

This is not the scene that won this entry, this is the one before it.

So here I am, in this extremely narrow corridor system, in the dark. It’s like a maze and I’m just trying to find my way through, but all of a sudden, the door I entered from slams shut. I go back and investigate, and it seems fine. But as I press forward, what is that I hear? The sound of a chainsaw starting up. You have to understand, after fighting that huge chainsaw-wielding boss, the last thing I want to hear or see is a chainsaw, much less being trapped in a pitch black claustrophobic maze with another chainsaw-wielding berserk.

I pick up the pace, but so does whoever is wielding that chainsaw. I hear it getting closer and closer, moving faster and faster, as I sprint through the hallways desperately trying to escape. But these hallways are so tight, and it’s like a maze. There’s no place to hide, and it’s easy to get turned around.

Sometimes, terror is best delivered by not showing something. Have you ever seen the film Seven? That’s one of the finest examples of this, especially the ending.

Cry of Fear makes the list once again, specifically the terrifying forest map. It’s a dark place and you’re not alone. Our chainsaw-wielding friend makes an appearance here once again…

Number five is the pants-sharting haunted house in Disponentia, a modification for Amnesia: The Dark Descent. It’s based on a true story, revolving around events that allegedly occurred inside the mansion, which makes it even more creepy. They did an amazing job at capturing the feel of a truly haunted house. It’s so unpredictable, so intense, and so dangerous.

Next we have the encounter with Malo in Amnesia: Justine, the official addon for Amnesia: The Dark Descent. This segment of the game is unbelievably tense; you’re being hunted down by a fast, untouchable, furious creature that holds a serious grudge against you. It’s chasing you, ripping down doors and destroying anything in its way just to get its hands on you. But it’s not just a simple chase scene… oh no. You have to solve some very basic puzzles while being chased, and you can choose to save someone else’s life on the way, taking up even more valuable time.

Chances are, when playing the game this scene will scare you so much that you’ll be unable to function properly. Therefore, you will die. Of all entries, this one is the most dangerous and has the most close calls. In fact, all of it is a close call. You’re seconds away from death the entire time, and one mistake will ensure your death, and death in this game is final as the game does not save! This is why it’s so intense.

Starting off our top three is Anna: Extended Edition; the entire house location to be more specific. I once called this game “the creepiest game ever made” and I still standby that statement. You’ll constantly hear sounds coming from the corner, or see objects moving themselves, the usual things you’d expect out of a haunted house. The atmosphere is beyond chilling, made even more creepy by the disturbing themes of insanity represented throughout the game in symbolism, metaphors, and also flashback sequences. Anna is amazing in the sense that it’s like gazing into the mind of an insane person. The world and story they created are something truly special… and truly horrifying.

Throughout the game you’ll come across up to 15 dynamic, randomized supernatural events that may very well be the creepiest parts of this already extremely creepy game.

Amnesia: The Dark Descent makes our list once again, with the Choir level. It’s a very open map, but you can hardly see due to the darkness and cloudiness in the air. Two unstoppable enemies, known as Brutes, wander the Choir dynamically and you’ll never know when or where you’ll encounter them. The psychological horror elements here revolving around torture are done perfectly, adding to the already disturbing atmosphere.

Yet another haunted house makes the list, this time belonging to Underhell. But don’t let that turn you off, Underhell and Anna are far from generic haunted houses, they’re amazing psychological horror experiences. It was a close call, but Underhell comes in at number one.

The game utilizes an even more dynamic, randomized, and unpredictable design, with dozens and dozens of supernatural events that either occur on their own, or by specific triggers. Either way, they’ll make you cry.

I’ve never felt so uneasy in a game before. Even after dozens of hours in the game, you’ll find new events or new messages waiting for you…

[…] Justine, a horror game. There is a section where the player is chased by a monster (one of the most frightening moments in video game history). During this high intensity chase, you will come across some mechanical doorways on the side of a […]

[…] to do another horror-themed article. Last year around this time, we made an article about the ten scariest moments in video game history. This year’s is simple: what are the top ten best horror games ever made, and why? Scroll on […]