Home » Gaming » Why We Prefer GOG 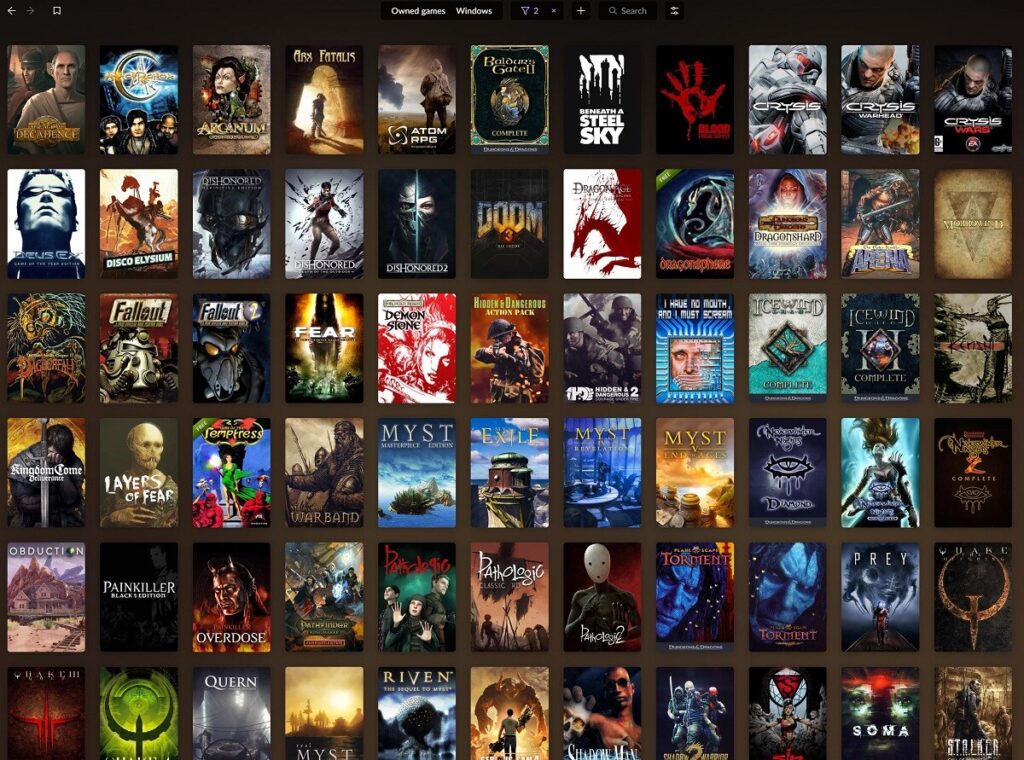 GOG, which stood for Good Old Games, is a digital game platform owned by CD Projekt. It is known as the DRM-free platform, but it is a lot more than that.

In the present day, Steam and Epic Games Store battle it out on the forefront, with people liking the free games offered by Epic Games Store, and detractors disliking the lack of a shopping cart on their store, the lack of user reviews, not trusting the telemetry since Epic Games is mostly owned by a Chinese corporation, and other issues. Steam has an army of fanboys who go around the internet preaching about how they will only buy games on Steam and nowhere else, while detractors complain about their profit margin.

Many of these opinions from both sides are misinformed, and they often overlook technical limitations with all of these platforms. Not only do we prefer to use GOG, and not due to any nonsensical brand loyalty (I don’t enjoy The Witcher games and I have very low expectations for Cyberpunk 2077), but I personally dislike every other popular digital game platform for various technical reasons which we will mention in our reasons below for why we prefer GOG.

This reason was obvious, but it’s not arbitrary like gamers tend to believe. There are many practical benefits to having no DRM.

So it’s really easy to see how detrimental DRM often is. I hate long loading times and the #4 reason above will literally make or break my experience. No DRM would be very helpful for Tom Clancy’s Rainbow Six 3: Gold which isn’t on GOG so I own it on Steam. Due to it having DRM on Steam (which isn’t a mandatory Steam requirement) and due to Steam not letting you turn off auto-updates for games (entirely Steam’s fault, it used to let you turn this off), I have to keep 2 copies of the entire game directory separate from the actual game installation, so 3 total: one single player backup (heavily modded), one multiplayer backup (only the community multiplayer patch), and I have to constantly overwrite the game installation folder with one of these depending on whether or not I want to play single player or multiplayer. 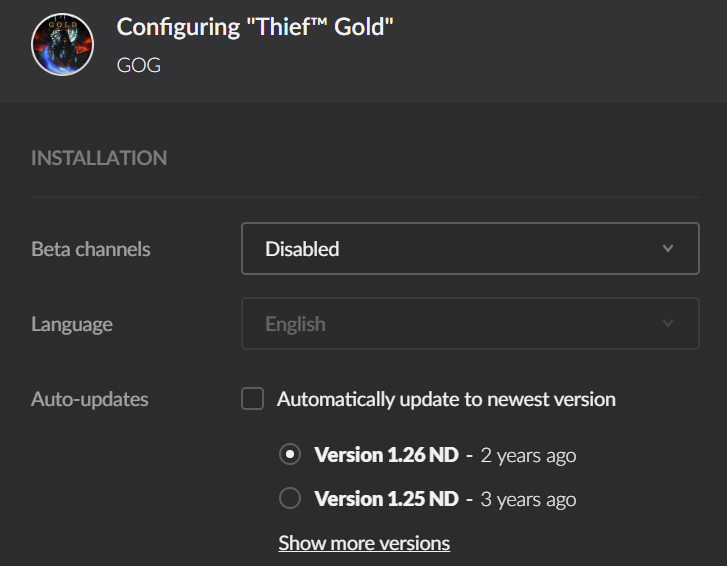 You can disable auto-updates for games on GOG, but you can’t do this on Steam or any other digital platform I know of, even though Steam used to allow it. Why is this useful, you ask? The first and foremost reason is once again game modifications. If a mod replaces the game executable, I’ve had Steam detect this and forcibly change it back to the original with numerous games, and you cannot prevent this from happening. But also if a patch happens to come out for a modded game then it may forcibly break your game.

You can only get around this with games on Steam that happen to not have DRM, like the S.T.A.L.K.E.R. series, but most do have DRM. So then you’re at the mercy of developers who can include multiple “beta” branches which you can opt into, effectively limiting yourself to one branch, preventing you from getting updates to the main branch. But this is not nearly the same as just disabling auto updates, a feature I constantly make use of on GOG due to my abundance of heavily modded games. The last thing I need is the damn digital platform breaking all of my games. No thanks.

You Actually Own Games on GOG

With Steam, Origin, Epic Games Store, uPlay, Microsoft Store/Game Pass, you can only install games through their service which of course requires internet connectivity. The installation media of the game is never accessible to you, you do not own it.

This is a sharp contrast from GOG which, after you buy a game, lets you download the actual DRM-free installation media for every game. It is yours to do with as you please, like back it up for a rainy day. If you’re constantly installing/uninstalling games due to storage limitations and live somewhere with rather unreliable internet, then being able to download and keep the installation media is a life saver for you. Even though I don’t live in such conditions, the peace of mind here is nice, and I do keep the installers on an external hard drive for every game I care about.

I’ll use this as an opportunity to mention some horrific experiences I’ve had with XBOX Game Pass. After uninstalling games it likes to just forcibly reinstall them. Also, I installed The Outer Worlds on a different drive rather than my OS drive, and that apparently confused Game Pass so it also installed a second copy on my C drive, and that’s a modern game with massive file size. This happened multiple times. At some point I unsubscribed from Game Pass, then resubscribed, and once I resubscribed it started automatically downloading every game I’ve played on there forcibly. What the hell?

So now we’re getting into more minor reasons which are just “like to haves.” One nice touch with GOG is that for older games that need community patches, they often include them by default. The Thief games come with NewDark, Vampire: The Masquerade – Bloodlines comes with the Unofficial Patch, although GOG can do better here since the Bloodlines unofficial patch is often out of date and they don’t preinstall community patches for plenty of games that need them.

They also made the bizarre decision to include Deus Ex: Revision as an optional download for Deus Ex, which is not a community patch but rather a mod that changes a lot to suit its own vision, but it is presented as if it is an unofficial patch. Bad move. “Deus Exe” should be included by default with Deus Ex, since that’s literally just an unofficial patch that makes the game compatible with modern widescreen resolutions and such, and Revision mod should be replaced by GMDX mod as an optional download which is a better and more faithful mod for Deus Ex.

It is nice of GOG to include community patches, but they need to do it more often and curate their selection better.

This is minor, but a nice touch regardless. GOG games often come with wallpapers, avatars, some artwork, and/or soundtrack with the purchase. This is largely dependent on the game publisher of course, but for lots of older games made by now defunct studios, you will get these things with your purchase.

Monopolies are bad for everyone except for the executives of the corporation that is the monopoly. Valve’s Steam platform has inadvertently raised an army of mindless fanboys who want Steam to be the only platform out there, which would give Valve free reign to do whatever they want on the market. Who knows, maybe they’d try paid mods again.

Therefore it is important to support competition, but who wants to support worse competition? This is why I only use platforms other than GOG for games I strongly desire that aren’t on GOG. GOG is by far the most pro-consumer platform by letting you actually own games, by mandating no DRM, by letting you disable auto-updates. It disgusts me to have to support any platform that doesn’t follow this model. We vote with our wallets. Considering the small marketshare of GOG combined with their pro-consumer nature, it is actually irrational to buy games that are available on GOG from another platform. For anyone who isn’t brainwashed by a corporation, GOG is currently the way to go for games it carries (that is if you want to own it rather than temporarily borrow from XBOX Game Pass), until other platforms change or until GOG changes for the worse.

And if you’re wondering about the downsides of GOG, really the only one is that it doesn’t get every game, a downside shared by every platform ultimately. GOG does have a generous refund policy, which is dangerous for them considering its lack of DRM. If you’re trying to think about downsides beyond this, then you’re stuck in the mindset of thinking that a client program/launcher is required and you’re thinking about launcher features. GOG Galaxy 2.0 is NOT required, but even then it’s a good client program. The modern Steam library update takes after GOG Galaxy 2.0, after all. It can sync to other platforms including Steam, becoming an all in one, and it has the important stuff like cloud saves, a wishlist, shopping cart, user reviews, join in progress, good library filters, good UI design, forums, official support guides, friends list and messaging. Also far less bugs than Steam’s highly inconsistent client program. GOG Galaxy 2.0 doesn’t have as many “community” or social features as Steam like status feeds, clans, screenshot sharing, streaming integration, all of which are insignificant. The only thing it really lacks is VR integration but again, the launcher/client program is optional anyway.

But due to people being ignorant and brainwashed, GOG only gets a relatively small amount of new games on day 1. This wouldn’t be the case if we made them more popular. And GOG not being more popular resulted in things like them having to axe their Fair Price Package Program which literally involved GOG paying the difference of regional game prices out of their own pocket, helping more disadvantaged countries. Yeah, that’s gone thanks to consumers not caring enough about themselves to do a little bit of research to realize that GOG is currently the best choice for them.

Looking Back at Prey

I would like to use GOG, but there are things that made me choose Steam over GOG. First, the games. I love JRPGs, and there are some JRPGs that cannot be bought on GOG, like the Atelier series, or any other games from Koei Tecmo. Secondly, regional pricing. If I compare the price of games that are sold on GOG and Steam, the price on Steam are mostly cheaper, thanks to regional pricing. Granted, there are some games where the prices from both stores are almost the same, but for the most part, Steam seems to be the affordable choice.… Read more »