Lian Li, known for their high end PC cases, has just released its latest in RGB fan technology, the Bora Digital Fan which is available in three different frame arrays for matching aesthetics for custom PC builds. The new fans are available in only the 120mm option with no official 140mm option which is an interesting move considering the amount of cases and coolers on the market that are shifting to 140mm.

The Lian Li Bora Digital fans are available in three different frame configurations, Black, Space Gray, and Silver, ranging from darkest to lightest. RGB lighting is available which projects itself from the center of the fan from the built in 12 RGB LEDs inside the motor assembly outwards through the semi-transparent blades. Included with the fans is the RGB controller which provides 16 different lighting modes, each with speed adjustments. The RGB effects can also be adjusted directly from the motherboard using a 3-pin addressable RGB header for matching the colors and effects to other PC internal components. Officially, the Bora Digital fans support ASUS Aura Sync, MSI Mystic Lighting, ASRock Polychrome and Gigabyte RGB Fusion.

The Lian Li Bora Digital fans are available now with an MSRP of  $59.99 USD. Included are a set of 3 fans, an RGB controller, power cables, daisy chaining cables as well as an LED hub. For more information of the LIAN LI BORA Digital fan, see the official product page for more information. 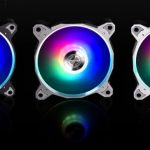 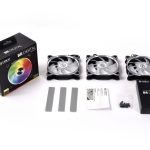 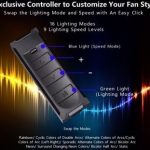 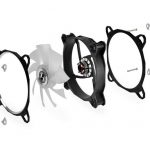