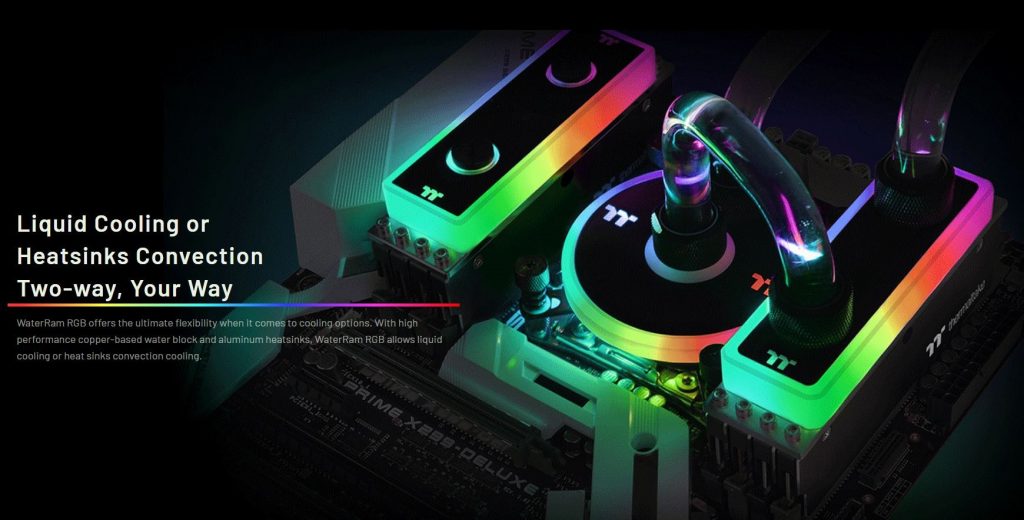 As of today, Thermaltake has officially entered the memory cooling market with it’s brand new DDR4 waterblock, the WaterRam RGB Liquid Cooling Memory block and modules. The kit is designed for custom loop setups and should work quite well with the recently announced Pacific C240 or Pacific C360 liquid cooling kits. The water blocks are directly attached to the top of the memory modules.

The kit comes with either two or for DDR4 DRAM modules clocked at 3200MHz which appears to be Hynix C-die. Each module is 8GB so you’ll be buying either a 16GB kit or 32GB. The modules are Intel XMP 2.0 ready for easy clock and profile setup. Below is the official Press Release from Thermaltake

While WaterRam RGB ensures peak performance, it is also gorgeously built with 12 high lumens addressable LEDs of 16.8 million colors that can be controlled by the TT RGB PLUS Ecosystemand sync with motherboards from ASUS, GIGABYTE, MSI and AsRock that have a 5V addressable RGB header. The WaterRam RGB Liquid Cooling Memory was crafted for excellence and takes your system to a whole new level!

Pricing and availability has not been officially released as of yet. More information about the kits can be found on Thermaltake’s product page. Additionally, Thermaltake just released a YouTube video highlighting the RAM kits: