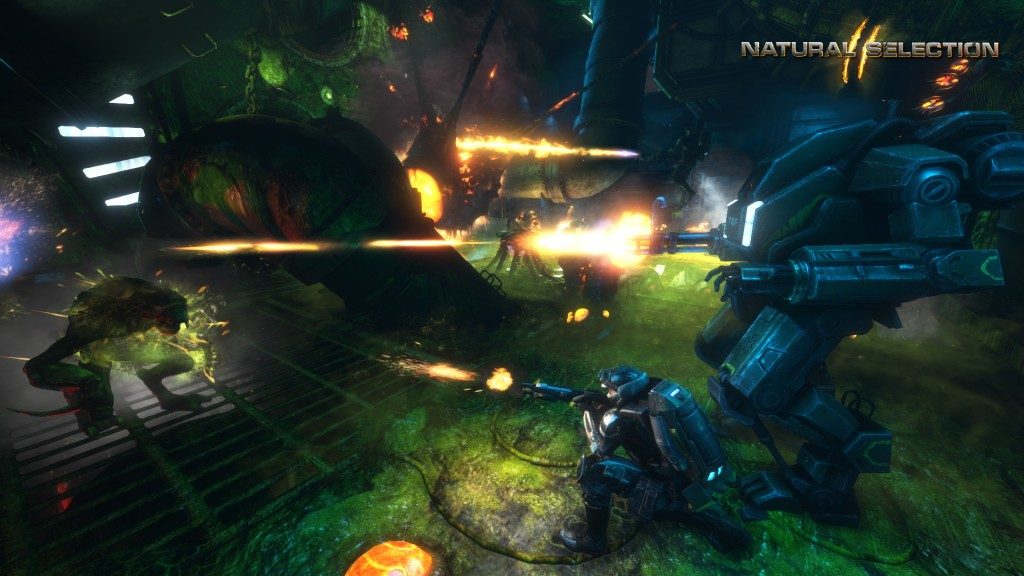 This is a distress call for all PC gamers who like shooters and/or strategy games. We’ll cut straight to the chase: Natural Selection 2 is an innovative PvP (player versus player) strategic shooter developed by Unknown Worlds. It’s one of the only PvP shooters that requires actual thought, planning, and team coordination. Pretty much every other PvP shooter like Battlefield, Call of Duty, and Titanfall involve none of the above and boil down to mindless run-and-gun with oversimplified game modes that involve mindless killing and holding points. If you believe otherwise, please refer to this article before continuing to read this one.

The teamwork and planning requirement is why Natural Selection 2 stands out. This is why it ranks highly on our list of greatest multiplayer shooters of all time.

Many of us here at GND-Tech used to play Crysis and Crysis Wars multiplayer, some of the only other strategic and well thought-out PvP shooters. Both games died rather quickly: playerbase was reduced drastically over time, and the recent Gamespy shutdown was the last nail in their coffin. Natural Selection 2 has been the only strategic PvP shooter I’ve found since that time, and it looks like it may share the same fate as our beloved Crysis games. We can’t allow that to happen.

Natural Selection 2 was released in 2012, and it captured our Best Multiplayer Game of 2012 award. It’s the successor to Natural Selection, which was a mod made for Half Life. Natural Selection 2 along with its predecessor are unique in many ways, pitting a human team (Marines) against an alien team (Kharaa) in complex indoor facilities, in a highly strategic battle. No less than one player per team assumes the role of commander, viewing the battle from a top-down view and controlling resources, team upgrades, and giving out orders just like an RTS game. The rest of the players are infantry, and there are many different infantry roles for each team, leading to one of the most diverse and long-lasting multiplayer shooters there has ever been.

The goal of the game is rather simple and clear: destroy the enemy HQ, however many there are (since commanders can place more HQs and order the team to assemble them). Commanders reside in an HQ. By default, each team starts with one HQ therefore they must choose one commander. Once all HQs are destroyed, the team that destroyed them wins.

It’s the strategy and tactics involved that make the game so complex. Just like chess, in which the goal is just to checkmate the king, but the strategy required can make a chess match very lengthy. The Power Struggle game mode for the Crysis games had the same goal, yet matches would usually last hours. Although Natural Selection 2 doesn’t have the scale of Crysis, matches can easily last up to and over one hour. Matches can also last for only a few minutes in theory… I’ve never seen it happen, but if one team is bad enough then the other team can rush their HQ and destroy it. This is why strategy is so important; you can’t allow this to happen.

The commander(s) spends Resource points, which are gathered by the rest of the team by killing enemies, destroying enemy constructs, and Resources just accumulate over time especially if the team builds more resource generators. Commanders will spend Resources on team upgrades, improving and adding new abilities for the team, and on placing constructs. The team has to build and maintain these constructs however, so communication is always very important. There are many different types of constructs, such as resource generators, teleports, and different types of armories (for Marines). With more advanced armories and proper upgrades, Marines can build things like jetpacks, mech suits, more advanced weaponry, and much more.

Both the Marine and Kharaa teams are very different, offering totally different gameplay, but at the same time they’re balanced. The Kharaa commander(s) have to spread their infection in order to build constructs in new areas, while the Marines have a similar principle in that they need functioning power in order to build constructs in places. The Kharaa don’t have armories, since they instead evolve into different forms with each one having their own abilities (which can be upgraded or expanded on by the commander).

Teamwork is essential. As stated earlier, there are different alien forms (five in total), each having totally different gameplay. The most basic, starter one is a pawn or foot soldier that is generally too weak to take on a single Marine, so they have to work as a team. The second form, known as the Gorge, is more of a support class, being able to create and repair alien constructs, heal teammates, create barricades, create turrets, and more. Teammates should look to keep Gorges alive. These are just a few examples of different types of teamwork involved. For those who were wondering, evolving into different forms isn’t a linear process; each form requires a certain amount of Resources for you to be able to evolve into it, and any form can transform into any other form, as long as you have enough personal Resource points to do so.

Commanders can’t build constructs, they can only place the foundation but the infantry has to build them. Infantry can’t see what’s going on at all times on the map, but Commanders can, so communication is essential. Natural Selection 2 is just so smartly designed that everything depends on teamwork and communication, and the team with the best strategy will win. Power Struggle in the Crysis games was a strategic game mode, but Natural Selection 2 takes strategy to a higher level that no other shooter reaches.

To make things even sweeter, Natural Selection 2 receives more developer support than perhaps any other game. Only Tripwire Interactive games (Rising Storm/Red Orchestra 2, Killing Floor) and PAYDAY 2 receive nearly this much support. But Natural Selection 2 has grown so much since its release in 2012, it’s hard to believe it’s the same game as it already feels like a sequel compared to how it felt at launch. Every aspect is fine tuned and improved to create better balance. Many new levels have been added to the game for free. Lots of new equipment has been added to the game for free, such as different types of hand grenades, drones which are placed by commanders (they can repair damaged constructs on their own), and much more. Buying the game now will give you all of the freely added content, since they were added via patches and not paid DLC.

This is why you should let everyone know about this game. Everyone who likes PvP shooters and/or strategy games should get their hands on Natural Selection 2. It’s one of the most involving multiplayer games out there. Not a strategist? That’s fine, stick to infantry and just follow the team’s orders and enjoy the diverse and very fun action gameplay. The game is a mere $25 on Steam, but it goes on sale very often, between a 75% and 90% discount! It’s also included in Humble Bundles quite often.

The PvP shooter genre is one of the absolute worst, but Natural Selection 2 redeems it and is a potential savior. It’s the only highly strategic PvP shooter around today, which is just sad. Do not let it fall into obscurity.