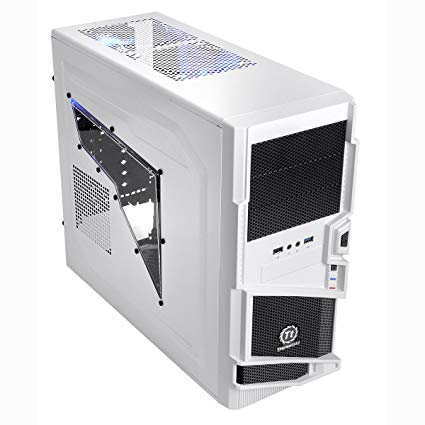 As of lately we’ve been seeing quite a variety of new gear coming from Thermaltake including some new style changes to a lot of their mainstream and high performance computer cases. The Thermaltake Commander MS-I Snow edition mid-tower computer casehas been visually reworked with a white power-coated finish with black accents. This does bring on a unique look, but I’m sure not everyone will find a black and white case to their likings. So during the course of this review, we will be very generalized when it comes to our opinions on the overall looks of this MS-I. It is interesting to see how different cases vary with each manufacturer. Some are subtle and sophisticated, while others are more aggressive. Thermaltake lately appears to be more on the aggressive side of the fence, producing cases that are meant to attract attention and be seen. The MS-I Snow Edition fits right in with the rest of Thermaltake’s lineup. It is filled with asymmetry and diagonal lines giving it a loud, unique overall look.

At first glance, it is easy to see that Thermaltake has taken your average mid tower mainstream case, and has added modern features such as USB3 capabilities and lots of cooling options including lots of fan mounting options. We will be going much more in-depth into these features later on in the review.

For a mainstream case, and considering that this case has an MSRP of only $54.99 we see a lot of nice modern features packed into this little bundle. Below is a list of features and specifications provided by Thermaltake.

A Closer Look – Packaging and Exterior

To begin lets take a look at the packaging Thermaltake used on the MS-I Snow Edition. When we received the case it arrived in perfect condition without any signs of shipping mishaps. Inside, the case was packaged like any other. Custom foam cut-outs on each side while the case was wrapped inside a plastic bag. All small included parts such as screws and zip ties were in a tied down zip-lock style bag inside the case. The box design is decent overall and does a good job highlighting the features.

Here is a look at the nice white exterior. As you can see in the photos below, the first thing you will notice is that the chassis itself is mostly white with black accents. Personally, I thought the color scheme worked out nicely and it is refreshing to see a case that has a non-standard color scheme every once and a while. The paint used is your typical power coat which is very durable. This particular paint has a slight gloss to it. The entire chassis is made of aluminum except for the front bezel area which is made from plastic. This plastic piece can be removed easily for maintenance purposes by simply giving it a firm pull away from the case.

The design, however, was not my favorite, but this is completely a matter of opinion. It is difficult to deduct points for design when there is so much opinion involved. The front I/O panel features a USB 2.0 port, a USB 3.0 port and a mic and speaker port for headsets. There is also room for three 5.25″ drives which when unused are replaced with a mesh cover. Just below the I/O ports there is a 3.5″ expansion bay slot. The bottom of the front area where the Thermaltake logo is, features the intake for a 120mm fan.

The back of the case starting from the top has a mount for a 120mm, 90mm or 80mm fan. A 120mm fan is included with this case pre-installed. Just below that there are two small holes for water cooling tubes. The expansion slots were probably one of the largest let downs of this case. The mount is an external style system which is awkward to use when using multiple expansion cards. To remove one, you need to unscrew all of them to free a bracket that keeps everything held down tight.

On the very top of the case we were happy to see a spot for two 120mm fans (not included). So it would appear that despite it being a mainstream mid-tower case, the cooling potential seems impressive.

A Closer Look – Interior and Installation

Moving on to the inside of the case, you’ll see it has a pretty standard layout which features a bottom mounted PSU. All sheet metal inside the case has been sprayed black which contrasts nicely against the white exterior. For a mainstream case, we were surprised at all the features this chassis was equipped with. First of all, we see a nice big hole on the motherboard tray which allows for changing out the CPU cooler. There are also several cable management slots surrounding the motherboard tray.

The drive bays are screw-less but for some reason Thermaltake decided not to equip every drive bay with this unique mount system. So if you are rocking a lot of hardware, time to dust off the old screwdriver!

Moving to the bottom we see a slot for a 120mm fan (not included) and a filtered intake for your PSU.

The included 120mm rear exhaust fan. There is nothing too special about this fan other than it does run pretty quiet while moving a decent amount of air.

Lastly, just to get a better idea of what you are getting, here is the case stripped down with all panels removed. The frame itself is made of aluminum pop-riveted together. Overall it is pretty sturdy and is very unlikely that it would ever break unless dropped, kicked, or falcon punched.

Making sure that everything fits the way it should easily and without hassle is key in designing a case. The Thermaltake Commander MS-! Snow Edition did fairly well making your life easy when it comes to installing your hardware. The first thing we installed was the Power Supply. Once nice feature is that installing your PSU is simple thanks to a custom mount system that locks the PSU in place which requires only a single screw.

Installing the motherboard was straightforward. Motherboard form factors are marked out on the motherboard tray so you know exactly which standoff locations to use. In our tests we had no trouble with a standard ATX motherboard.

We mentioned earlier about our disappointment of the system this case uses for mounting your expansion cards. It is very awkward and we feel that the was definitely the largest downfall we found with this case. As mentioned above, it is very cheap and difficult to use especially when dealing with many cards at once.

The screw-less drive bay system worked without a hitch. Mounting or unmounting hard drives is as easy as turning a knob and it seems to hold the drive in place pretty well. Our only gripe here is that Thermaltake did not include enough to cover all drive bays.

Above is one of our test systems we used. Forgive the shoddy cable management

We were pleasantly surprised with the overall experience that the Thermaltake Commander MS-I Snow Edition had to offer. Though it’s a small package, it offered many features that you would find in cases costing twice as much. This case has an MSRP of $54.99 which is a good deal considering the features you get inside a smaller mainstream case. The white exterior with a black interior was a nice touch which breaks away from the typical case color schema we see today. Although I was not particulary impressed with the overall design, like mentioned beforehand, that comes down to opinion as I am sure that there are many out there who would like it.

The overall build quality was good, the case was sturdy and didn’t feel cheap. We mentioned earlier about our dislike for the expansion slot mounting system and needless to day, this was probably the biggest drawback to this case. So if you are the kind of person who is constantly changing out their expansion cards, you will probably find this case frustrating. But other than the expansion slots, we found the rest of the case very easy to work with as far as installation and maintenance goes.