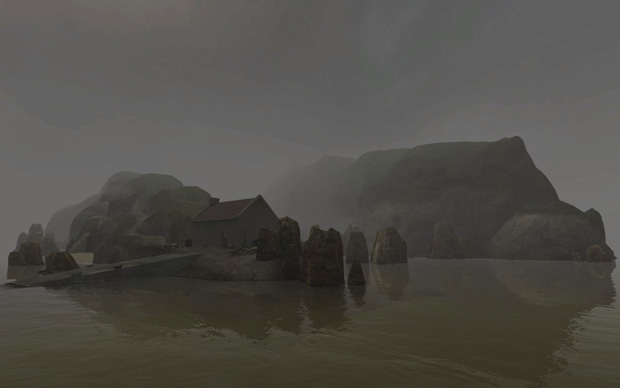 Dear Esther is a new story driven, first person adventure game. It is based on a modification released for Half-Life 2 just a year ago. It abandons traditional gameplay, focusing only on exploration and story telling. What does this unique title bring to the table? Was it really worthy of a full game release? Lets find out.

Dear Esther was released only on Steam, so most will know how to install it as it is a very straightforward and fool proof process. The game itself is built on the source engine, touched up from its mod form as seen in the top image. You get the usual options for audio and key customization, as well as typical graphics customization.

So what is this game about? Dear Esther puts you in the shoes of a lonely man on an island. As you progress through the game, there will be no battles, puzzles, or interaction with other creatures. This game puts you in complete isolation as you advance through this mysterious island with monologue full of symbolism, imagery, personification, metaphors, and other literary elements. The language of the game is unlike most, and I wouldn’t be surprised if most people fail to comprehend many parts of the story without reading a synopsis or this review.

As you dwell deeper into the mysterious island, the monologues get more complex and conflicting. The language of this game is unlike most. It’s a grown-up game that will let the player make up their own interpretations in the story, something found in only few games such as Cryostasis, Penumbra, Amnesia, and Silent Hill. Is the island real? What is this incident he is describing? What happened to Esther and why is this protagonist alone on an island?

Answers are there… not for every question mind you. Have an imagination when playing this game and you might find it immersive. The game took me just under two hours to complete and it is almost necessary to play it in one setting. Pay attention to each bit of monologue – you’ll see many recurring themes, ideas, and symbols. These symbols will show up physically throughout the game as well.

In its simplest form, the story of Dear Esthur can be seen as quite simple. The island is your retreat from the “mainland”, where you pursue your only goal after a terrible accident. What accident, you might ask? I will leave it up to the player to decipher the symbols and messages found throughout the game, and formulate their own questions and answers.

The island is an interesting place. Immersion is one of the game’s main attempts, and it does the job. You’ll find caverns, including one specifically large one that is very impressive. The monologues play at specific points on the island and they do so with reason, however the monologue and the points at which they are spoken varies throughout each playthrough. Therefore, after playing this game once, it might be worth going back through in the future.

The story is rather dark and completely personal to the protagonist. I found the ending of it to be quite predictable. Keep in mind that this is a $10 game, but there are games with more symbols and messages to the storyline plus lots of gameplay elements (looks at Silent Hill). It’s true, those didn’t come out for $10. I suppose if you’re in need of a game that will mess with your mind, then this is worth the buy. Don’t expect an action packed game as the only gameplay element is WASD – walking. There is no running, crouching, puzzles, enemy encounters or any of that.

So what’s left to say after this closer look of Dear Esther? It’s a story driven first person adventure game, less than two hours long in my case, advanced language, no action, and a fairly immersive atmosphere. It is rather linear, although not like a corridor game. There are multiple paths for you to take and you can look around in rather open spaces. Dear Esther is a unique game that does feel more like a mod for another game (as it originally was), but it is worth a playthrough if you want an interesting story and want to see how much of it you can grasp.

Dear Esther is made on the Source engine, and is by far the best looking game on that engine I’ve ever seen. It is very easy to run especially on lower settings, for those of you without a powerful gaming computer. However, overall it still looks quite a bit outdated. Shadows are hardly cast by anything, there are lots of low polygon objects, vegetation is 2D and rotates when you revolve around it, and textures are a mixed bag. Note that these images are taken with 2×2 Supersampling and 4x MSAA enhancements, as well as 4x SGSSAA transparency and most of all, ambient occlusion forced on via NVIDIA Inspector. So my images look better than the game normally does. The supersampling helps in areas with dense vegetation, and the ambient occlusion just adds a lot to the visuals. These external addons won’t help Dear Esther’s score in this section though.

Although the technology is outdated, the presentation and artistic design really help the game’s visuals. The caverns are amazing and have some seemingly high resolution textures.

At least the wind moves the 2D vegetation.

This is where the impressiveness really kicks off in both the graphics and level design.

I wasn’t kidding about low polygon objects. They are most evident here.

Water looks pretty good throughout the game, especially the reflections.

Another oversized moon. Why do so many games have this? Some may say “Oh but the island might not be real”… well even if you interpret it like so (and I will debate this with you), how does that explain the moon being enormous?

I’ve had no problems with view distance throughout the game. The sections of the island you visit aren’t terribly large either.

Graphics are great for the Source engine, but this engine is a bit outdated and you can’t fully hide that. As for audio, the soundtrack is subtle but very fitting and a great addition. The game is full of monologues and the voice acting is done very well. There aren’t even many sound effects – the ocean tides and swimming sounds are great. Speaking of which, hold your head underwater for a bit of foreshadowing. Anyway I have no complaints about the sound, graphics could be better but the Source engine is all they had and they made the most out of it. I think it’s time to conclude this rather short review.

This was a hard game to review for sure. I don’t spoil storylines, but when a story is all there is to a game then that complicates things a bit. Dear Esther’s storyline is told with advanced language and I enjoyed analyzing it and drawing my own conclusions. The immersion that the presentation of the island brings is great, and the graphics are an impressive feat of the Source engine. Audio is subtle in both the soundtrack and effects, but they work well and the voice acting is good. Lets score this game, with 5/5 being the highest in the subcategories and 100 being the highest overall score.

[…] Not too long ago I reviewed another game that takes you through a minimalistic, isolated journey, Dear Esther. That one had its heart in the right place and was quite interesting, though not for everyone. Lets […]