Intel has recently released Coffee Lake, which includes the 8th gen Core i3/i5/i7 processors and the Z370 motherboard platform. Supplies are still low, so not everyone has theirs yet. Luckily a couple of us here at GND-Tech managed to buy a Core i7 8700k early for retail price, allowing us to bring you this article!

Overclocking Coffee Lake is hardly any different than Kaby Lake/Skylake or Haswell and the related HEDT models. You will want a decent Z370 motherboard, as lower end motherboards often lack overclocking ability or proper VRM cooling. The hardware used for this guide is listed below:

As usual for Intel, only models ending in ‘K’ such as the Core i7 8700k are overclockable, and you will want to delid your CPU especially when overclocking. Intel uses cheap, low quality thermal paste between the IHS (Integrated Heat Spreader) and CPU die, and poor adhesive to glue them together, resulting in poor thermal contact and potentially uncontrollable temperatures when overclocking. “Delidding” is the process of removing the IHS and cheap thermal paste, applying higher quality thermal paste (liquid metal is ideal), then optionally sealing the IHS back in place for protection using better adhesive. This improves temperatures MASSIVELY, it is a must for overclocking Intel processors.

To overclock, go to your motherboard’s BIOS section that allows it. For my ASUS Z370, that is under Extreme Tweaker. Overclocking is disabled by default, controlled by the Ai Overclock Tuner setting, but this won’t be the same on other brands. I use XMP, which loads manufacturer default RAM speed, timing, and voltages. It is essentially guaranteed to work, unless your RAM is faster than your board can handle, but unlike AMD any recent Intel motherboard can handle DDR4 3200 MHz (even with all DIMM slots filled with 8GB modules).

The downside to XMP is potentially higher than needed CPU VCCIO and System Agent (SA) voltages, but more on voltages later. Other important settings in the photo above include: Disable Intel SpeedStep when overclocking. It can be found in CPU configuration setting. Disabling it will prevent the CPU from downclocking when idle, since you don’t want it to downclock at the wrong time.

Turbo mode has to be enabled to overclock, otherwise nothing happens. Most of the above settings have DRAM versions as well. The same logic and settings apply.

Stress testing or stability testing is necessary in order to validate whether or not the CPU and RAM are stable. If either of these are unstable, the system will crash and unstable RAM can lead to data loss.

HWiNFO64, for examining CPU, motherboard, RAM, and all other hardware settings within Windows.

The stress testing procedure is very simple. First run Prime95 Large FFT for at least 8 hours, the more the merrier. Large FFT is best for stability testing. Monitor temperatures early on, if they stay within the safe range (not consistently over 80 degrees Celsius) after the first 10 minutes then there shouldn’t be a problem. If your system crashes during this test, go back and adjust your settings as needed. Either your voltage is too low or your speeds are just too high. Always remember the importance of AVX offset and how you will have to use one most likely (my 8700k cannot run AVX applications above 4.8 GHz) and cache speed limitations (4.5 GHz is the maximum for my 8700k).

After passing Large FFT with a satisfactory oevrclock, then run a custom Prime95 test for a similar duration using the Blend settings but test 80-85% of your RAM instead (or even 90% if using 32GB). Be sure to close all other applications and unneeded processes and services.

Better memory stability testers include HCI Memtest which is run from Windows (launch one instance per CPU thread, and don’t test more than 80-85% of total RAM), and the best being stressapptest which requires either Linux or bash terminal installed on Windows 10. Of course there is also MemTest86+. Feel free to use all of these tools. Prime95 after an over night session.

But that brings up one last thing; the instruction sets utilized by the stress tester you are using. Prime95 defaults to AVX or AVX2. So go ahead and test Prime95 Large FFT and Blend using default Prime95 settings, to verify AVX stability. Once you pass, you will want to disable AVX instruction sets to test the full CPU frequency (which is most important as most applications do not use AVX). To disable AVX in Prime95, edit its local.txt file with the following:

So there is a basic overview of the important settings for Coffee Lake overclocking. Let us know if you have any other suggestions by posting a comment below, and feel free to share your overclock achievements! 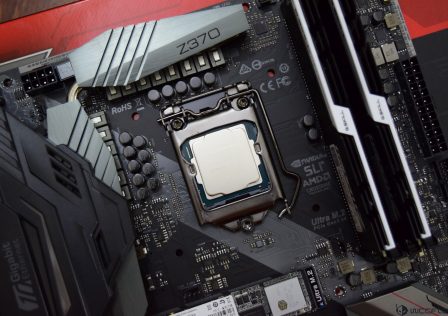 […] the WS C246 PRO is geared more towards high powered workstations and servers so likely not a lot of overclocking support.  In addition to the 4x PCIe slots, the new motherboard features two M.2 slots for […]

[…] will come with a host of features gamers, overclockers and extreme system builders demand such as Coffee Lake overclocking support, RGB lighting, and robust CPU […]

[…] under the AORUS platform, Gigabyte’s high end gaming lineup. Expect these boards to be packed overclocking features, and other features gamers demand. The Z390 AORUS EXTREME appears to be the new flagship […]