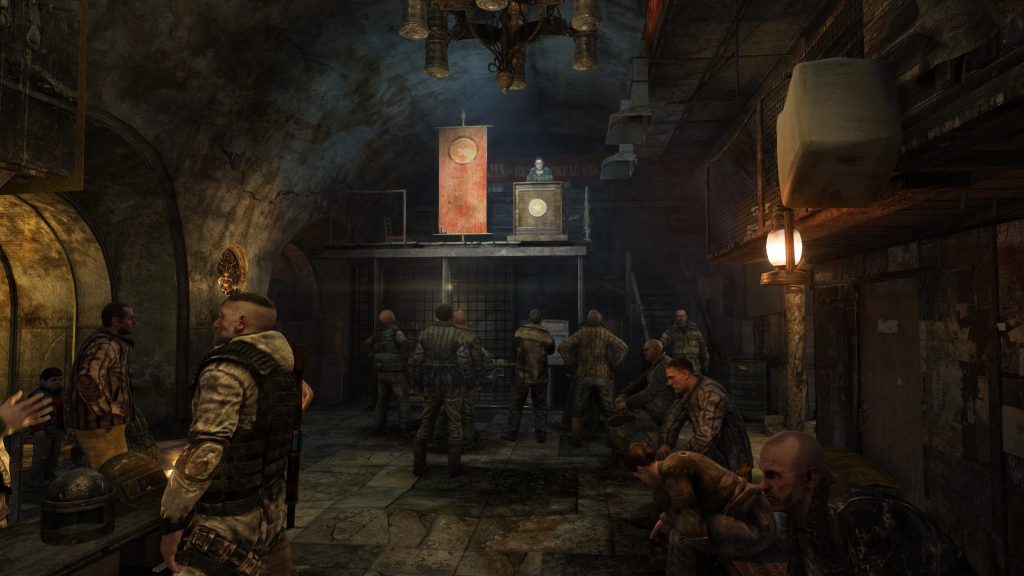 Metro 2033 Redux is the biggest improvement, since it’s a remake of Metro 2033 on the newer and much improved engine used in Metro: Last Light, with even more improvements. Visually, it approaches Last Light but falls a bit short, however it’s stunning nonetheless. Animations are mostly identical to Last Light. It adopts all of Metro: Last Light’s graphics options including SSAA, and also has lots of new options like crosshair and hitmarkers (which were only controlled by difficulty previously).

Mechanically, the Redux versions use a mix of Last Light mechanics and Metro 2033 mechanics, leaning toward the former much more. Every new gameplay mechanic from Last Light is present in both games now, although they went back to using Metro 2033’s watch/time check mechanic. Weapons were redesigned in 2033 Redux, and Last Light’s upgrading system is included. Cutscenes were redone as well.

The biggest change has to be Metro 2033 Redux’s redesigned levels. They’re now far more open, much more detailed, and much more interactive, following in the footsteps of Last Light.

All of this combined makes Metro 2033 Redux a near-perfect remake. Personally, the only things I dislike are the forced battle music in both games (the original Metro 2033 had little to no battle music which I liked). An option or a slider to control ambient music and battle music separately should be included, I wish more games had this option. Both games also lack a FOV slider, but the FOV can be changed in the config file in your AppData folder. Also, the new voice acting for children is awful.

Metro: Last Light Redux is much less of a drastic change, since the original game is only a year old anyway. Last Light Redux was released primarily to allow PS4 and XBOX One gamers to play the game. The Redux version includes all DLC as a bonus. Both versions have the new difficulty system, allowing players to choose Spartan mode or Survival mode. The former is a more casual difficulty option, in which supplies are easier to find and AI awareness is greatly reduced. The latter is self-explanatory and is the opposite of Spartan: supplies are far more scarce, AI is more aware and deadly.

After choosing Spartan or Survival (we obviously recommend Survival), players can choose one of five difficulty options: Easy, Normal, Hardcore, Ranger, and Ranger Hardcore. As the difficulty increases, supplies become even more scarce and both the player and all enemies/creatures take more damage, leading to balanced and realistic difficulty. Ranger or Ranger Hardcore is recommended; the problem with the latter is the complete lack of an inventory which is a silly issue that was never fixed unfortunately.

Although Last Light Redux has some new areas and weapons, the graphics are worse. Tessellation is gone, ambient occlusion seems worse, we can’t really recommend it. PC gamers who own Last Light don’t need to upgrade to Last Light Redux. However, those who own Metro 2033 and are a huge fan of it should consider upgrading to Metro 2033 Redux. Those who don’t have one or both of these titles should just get the Redux versions. Anyone who owns the previous games on Steam gets a 50% discount!

So there’s our little overview of Metro Redux. We can’t recommend the Metro games enough… Metro 2033 really raised the bar in the shooter genre, and 4A Games continues to do so. Let’s hope we see a Metro 2034 game in the future, and let’s hope it isn’t consolized like Last Light Redux.

[…] Metro 2033 Redux and Metro: Last Light are linear shooters, yet have enough gameplay variety to last 15-20 hours. This is due to different kinds of weapons having distinct functionalities, strengths, and weaknesses, such as managing the air pressure inside pneumatic weapons, the inclusion of throwing knives and different kinds of traps and grenades, and the gun customization. Another reason their gameplay holds up is because they (especially Last Light) have incredibly immersive optional exploration that enhances storytelling, and because of the stealth implementation. The stealth of Metro 2033 is similar to The Last of Us in the sense… Read more »

[…] some blur, but even that is extremely rare. Only the few games with native supersampling (e.g., Metro Redux and Last Light, Thief) as well as Unreal Engine 4 games (TAA) can provide practically perfect AA […]