Looks like it is time for another mechanical keyboard review. A few months back, we looked at the Cooler Master Storm QuickFire Rapid. It was CM’s first mechanical keyboard, and to the surprise of many, it came out strong with an astounding 95/100. However that is a tenkeyless board, which means it has no numberpad, which some people don’t wish to compromise. This leads us to the QuickFire Pro, a mechanical 104-key board.

For those who are unaware of mechanical keyboards and what they are, here’s some basic information on them. They are far more reliable and effective keyboards as they use a mechanical switch for every key. Mechanical switches actuate about half-way to the bottom, which eliminates the need for bottoming out the key, reducing fatigue in long typing sessions. Lifespan is rated about 5x more for a mechanical switch, compared to normal keyboards.

There are many different mechanical key switches designed to give a different feel; some are linear, which means the switch is pressed straight down and gives no feedback to the user. The QuickFire Rapid I reviewed uses linear switches. Then there are tactile switches, which give feedback at the actuation point (which again, is about half way to the bottom). This feedback is felt as a slight bump, and some tactile keys also combined a clicking sound with this feedback to alert the user that he/she has hit the actuation point.

Tactile keys are generally preferred for typing, since compared to linear switches, it is easier to just give them a light press so that they only travel to the actuation point, instead of bottoming out. Linear keys are generally preferred for gaming, since you will be bottoming out anyway as you hold down keys to move and do other things. Here is an in-depth mechanical keyboard guide for more information.

The model we’re looking at uses Cherry MX Brown switches, which have a slight tactile feel, no audible click, and light actuation force at 45g.

The QuickFire Pro was released recently, and that’s what we’ll be looking at today. It is a full size 104-key board, a premium quality product with a nice value. It features, more or less, the same minimalistic design as the QuickFire Rapid. Lets see if Cooler Master can keep up the streak!

There are some of the basic specs of the QuickFire Pro. They look a lot like the QuickFire Rapid, except for the red backlighting and part in bold. NKRO (N-Key rollover) in USB mode? That’s something manufacturers have been trying to implement for years. This means that you can press down all keys at once, and they’ll all be registered. Normally, this is only possible via PS/2 interface, and USB is normally limited to 6KRO (excluding special keys such as CTRL). Corsair claimed 20KRO on their USB keyboards, and some people have found a way to implement NKRO in USB as seen here. But CM claims to have done it! That’s something that will have to be confirmed in this review. Anyway, lets look at the packaging.

As you can see, the box looks as expected, showing product highlights, pictures, and specs.

More specs on the back, in a bunch of different languages.

Inside you’ll find the keyboard wrapped in foam, and also some accessories hiding under the top.

This is everything: the keyboard, cable, manual, and key puller. Nice of them to include a key puller, as this is normally an extra $5 or so. The detachable cable appears once again – that was something I really liked about the QuickFire Rapid. However, this time no PS/2 adapter is included since this keyboard apparently does NKRO in USB mode, opposed to the usual 6KRO USB limitation. There’s still the difference of USB using polling and PS/2 being interrupt based, but that doesn’t matter to most.

Now lets take a closer look at the keyboard itself.

Here is the QuickFire Pro in all it’s glory. It isn’t over-the-top gaudy, but has some distinctive design features as well as a unique font and some branding. I like the all-black, scratch-resistant finish. It doesn’t get smudged from fingerprints either. One thing that stands out is how heavy the keyboard is. It has a high quality feel, just like the QuickFire Rapid. This one weighs 1300g or 2.86 lbs.

Noticeable design patterns are on the front and back. This is some “gamer appeal”, but thankfully it isn’t overdone like other keyboards.

On the back of the keyboard, you’ll find four rubberized feet plus folding stands, and cable management grooves which are very nice to have. The back and sides have a rubber coating, while the surface does not. All of it is quite scratch resistant, and does not collect fingerprints.

Here is the detachable cable. I wish more keyboards had this feature. This is especially good for LAN gamers. The full-braided sleeving is top notch, and the USB connector is gold plated.

The cable is plugged into the bottom of the keyboard, close to the middle.

Back to the surface, the NUM LOCK, CAPS LOCK, and SCR LOCK have a distinctive appearance on the top-right of the keyboard. Something else is also distinctive here – the secondary function for the minus key, asterisk key, slash key, and NUM LOCK key. You can change the response time with these, when holding down the FN key. Available options include 1ms, 2ms, 4ms, and 8ms. I’ve never seen this feature before. 1ms is the default response time.

The INS and DEL key also have a unique secondary function. With these, you can choose 6KRO or NKRO respectively. It comes at 6KRO by default. Enabling NKRO (FN + DEL) installs another driver.

Here is a closeup on the font. It is the same distinctive font as the QuickFire Rapid, and I happen to like it. Keycaps are laser-etched, although I’m not sure of their material. I’d assume ABS.

One thing to note is that the Windows keys (which have a CM Storm logo) are not the usual R1 1×1.25 size. Instead they’re 1×1 keys. I’m not exactly sure what row they belong to, here’s how they look.

Here is a look at a Cherry MX Brown switch. All switches on this keyboard are Browns, and it uses Costar stabilizers. No Clear spacebar, sorry! As I said earlier, Brown switches have a light 45g actuation force, and light tactile feel with no audio feedback/click. Despite the lack of a click, these and other mechanical switches are noticeably louder than rubber domes if you bottom out. I feel that the tactile feel is too light for my typing preferences, making it harder to not bottom out, compared to Cherry MX Blue switches. It’s still a better typing switch than Red switches in my opinion. Browns are the only model currently available in the US, but this is subject to change. In total, this keyboard will be available with Browns, Blacks, Blues, and Reds depending on region.

F1 to F4 keys also have a secondary function. These control the backlight. F1’s second function enables or disables the backlight, F4 cycles through the modes, F2 dims the light, and F3 increases the brightness. There are five brightness levels, and it gets REALLY bright on the highest one. This is because, unlike cheap keyboards, the QuickFire Pro has a red LED under each and every backlit key.

Here is backlight mode 1. It lights up the F1 to F4 keys, 1-5 keys, Q, W, E, R, A, S, D, F, Z, X, C keys, spacebar, arrow keys, and the CM Storm logo. These are the more common gaming keys. Mode 2 is just like 1, except the LEDs “breathe” or pulsate. This means they don’t maintain a constant brightness setting, and constantly go from relatively dim to bright.

Mode 3 is “FPS mode”. It lights up the WASD keys, arrow keys, and CM Storm logo.

Here is a closeup of the WASD keys, lit up.

Well that rounds up this section. I don’t know who the OEM is, but I’m just as impressed with this as I was with the QuickFire Rapid in terms of build quality. However, a backlight was always on my wishlist and the QuickFire Pro mostly addresses this wish. Overall this is a solid and well-built keyboard, so lets move onto its performance.

For performance tests, I used this website for typing speed tests, and graphed my results. I also used this site to text the KRO. Lets look at those results first.

Results in USB mode set to 6KRO look like this. Only a maximum of 6 keys (excluding modifier keys like CTRL) can be registered at once.

So does NKRO really work in USB mode? See for yourself. I don’t know about you, but I’m impressed. NKRO seems to work – these aren’t the maximum amount of keys that can be pressed, just the max I can hold down with both of my hands while hitting screen capture with my toe. Keep in mind that if NKRO is enabled, then you cannot enter your motherboard BIOS.

Now lets look at typing tests. I’m no record holder, I’m mostly a gamer. Here’s my average words per minute (of three tests) using the site linked above. It also calculates errors – I had a maximum of 3 on each keyboard. I’ll compare the QuickFire Pro (listed as QF Pro due to a lack of space) with my QuickFire Rapid, as well as my old rubber-dome Logitech G11.

So that’s 88 WPM on the G11, 99 WPM on the Cherry MX Red QuickFire Rapid, and 103 WPM on the QuickFire Pro. That’s a decent increase over the Red switches, especially since I had some really hard passages this time around. I did, over time, practice typing without bottoming out so this may account for the increase over Red switches. I’m pleased with this typing speed, and the Brown switches typing performance. I like the feel of Blues better for typing, due to the heavier tactile feel and audible click, but Browns are generally considered the best middle ground switch for typing and gaming, due to the light tactile feel and lack of audio feedback.

I also did some gaming sessions, namely in S.T.A.L.K.E.R. Shadow of Chernobyl, Crysis, and ArmA 2: Combined Operations. While playing them, they’re without doubt better than rubber domes due to the much smoother operation, but I find myself preferring Red switches due to the smoothness these linear switches provide. This is all about personal preference though, but nevertheless I feel much more in control of my movement compared to rubber domes. So for those who are afraid of tactile switches and games, no need to worry. After all, rubber domes are heavily tactile. They have a different, more restrictive tactile feel, so Browns will feel like a relief. Any mechanical switch will.

This is the second mechanical keyboard we’ve seen from Cooler Master, and they continue to impress. Like the QuickFire Rapid, the QuickFire Pro has an excellent build quality, visual appeal, convenience, and even an attractive value over other mechanical keyboards. Lets get to the scoring, with 5 being the highest score in the sub-sections, and 100 being the highest overall score. 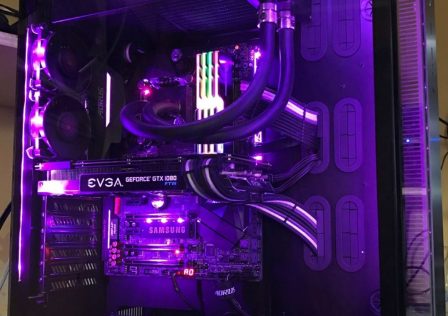 A Guide to Computer Cases 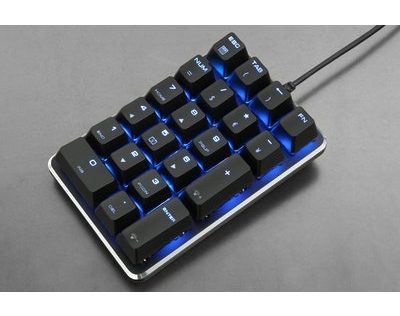