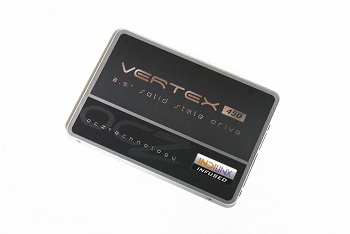 Just when you think solid state drives are about as fast as they are going to get, OCZ’s Vertex 450 was released and proved us all wrong. As of lately SSD read and write speeds have pretty much capped due to hardware limitations of the SATA6 controller. Anywhere from 500-550MB/sec read/write speeds are about as fast as you are going to get. Manufacturers today are focusing heavily on the SSD’s IOPS (Input/Output Operations Per Second). IOPS are used as a general benchmark for read and write performance so it’s important to factor a SSD’s IOPS in addition to it’s read and write speeds when determining how “fast” an SSD really is.

The Vertex 450 is pushing some pretty strong ratings according to OCZ. Random read speeds peak at 85,000 IOPS, and random write at 90,000 IOPS. These numbers are very close to the Vertex 4 so it will be interesting to see how this newer generation compares to its predecessor.

As far as capacity goes, the Vertex 450 comes in three sizes: 128GB, 256GB and 512GB. Each come with OCZ’s home brew NAND controller which based upon past reviews, has shown outstanding performance when compared to SandForce. The Vertex 450 uses the OCZ Indilinx Barefoot 3 M10 controller.

Take a look at the next page for even more detailed specs!

I mentioned on the previous page that the OCZ Vertex 450 is equipped with OCZ’s own in-house controller, the Indilinx Barefoot 3 (M10). This is no doubt the biggest difference when comparing the Vertex 450 with any other SSD on the market. We will discuss this controller in detail on the next page and hopefully answer some questions you may have especially the advantages or disadvantages over the SandForce controller. But one thing is for sure, from what we have found, an SSD is mostly limited by the performance of the controller.

The Vertex 450 is covered by a 3-year warranty.

Overall we are looking at some pretty good speeds! Take a look at the next page for a little more on the brain that controls this SSD.

Indilinx Barefoot 3 is the new controller which powers OCZ’s current lineup of SSDs. The NAND controller is essentially the ‘brain’ of the SSD. In the past, OCZ has always used the SandForce lineup of controllers which worked very well with the success of the previous Vertex series from OCZ. However, to date, there is not a whole lot of information available about the Indilinx controller compared to the piles of info we have on the SandForce.

The Indilinx Barefoot 3 is controlled by two separate processors; the ARM Cortex processor, and the Aragon Co-processor. Caching for this SSD is powered by two chips of DDR3 from what we could tell. For this particular model, caching is set to 1GB. The 128GB model is said to only have 512MB.

The OCZ Vertex 450 was overall packaged nicely featuring some nice attractive design work on the package exterior. Inside you will see that everything is bundled nice and tight, eliminating wiggle-room which could cause damage during shipping.

Upon opening the package we find the SSD packaged inside a custom foam cutout which retains the SSD itself, and the 3.5″ bracket for use inside a PC. Also included in the package is a manual containing product and warranty information, and a I (heart) my SSD sticker.

Here we have the SSD in all its glory. Its construction consists of an all aluminum housing giving it a nice solid, somewhat heavy feel. This solid construction will definitely protect it from any accidental mishaps such as drops or pets or what have you.

The included bracket can be used to convert the SSD’s 2.5″ form factor into a 3.5″ configuration for use in standard PCs.

Now, lets crack this thing open and take a peek inside. Here we find a single PCB with all the internal components installed. What probably stands out most is the Indilinx Barefoot 3 controller chip located right in the center with 16 NAND memory chips located on the front and rear sides of the PCB.

Overall, the construction and appearance of the Vertex 450 was top notch. I can only hope that this SSD performs as well as it feels.

The motherboard used was an EVGA Z77 FTW configured in full SATA6 mode.

Installing the hard drive is about as straight forward as it gets. There is absolutely no difference between installing the SSD over a typical HDD when the 3.5″ bracket is used. In a notebook scenario, of course installation will vary depending on what you are installing it into, but the Vertex 450’s size and screw configuration will match whatever 2.5″ HDD you currently have in your system. So you should not have to worry about any hard drive incompatibilities.

For our first read test, the Vertex 450 peaked at 288MB/s maximum read speeds.

Using the same tool, we achieved a maximum write speed of 381MB/s.

The read and write speeds were a bit better here maxing out at 542MB/sec read speeds, and 514MB/sec write speeds.

This was the best HD Tech score we’ve ever seen! Read times were about 446MB/sec. Quite impressive to say the least!

Last up for our performance testing we’ve got AS SSD Benchmark. Another handly little tool used for measuring HDD and SSD read and write speeds.

Overall pretty impressive results from AS SSD Benchmark tool. Sequential read tests peaked at 497MB/sec while the same write tests peaked at 475MB/sec, We got an overall score of 1006.The only drive that got a higher score was the OCZ Vector which clocked a score of 1070.

In a nutshell, it’s hard to make sense of SSD transfer speed results from different programs because they are all… well different. Basically all this proves is what the drive can do under different scenarios. Each program benchmarks a little bit differently. Exactly how different we will never know.

That being said, we were able to reach the 450’s rated read speeds of 540MB/sec using Atto benchmark! It seems that about 90% of the time, the manufacture’s rated speeds are never hit using benchmark applications. However, there is that small percentage that do, which says a lot about the overall quality and engineering of the drive.

Typically during this part of the review I like to go over briefly the pros and cons about how the drive did overall in our tests. Coming up with a list of pros was easy, but as far as cons go, not so much. Overall the Vertex 450 did extremely well during our performance tests, surpassing OCZ’s rated speeds by a small margin. It’s solid construction is a nice added touch adding a sense of quality to the SSD which you won’t find with other manufacturers.

MSRP for the Vertex 450 is $229.99 but it seems most places are currently selling it for $219.99. At the time of writing this review, this price is competitive for its performance level.

Overall the Vertex 450 did extremely well during our performance tests

[…] on the Vector 150 is OCZ’s brand new Barefoot 3 controller is very close to that found in the Vertex 450, which we recently reviewed. With that being said, if the performance of the Vector 150 is anything […]

You wrote about the actively cooled CPU VRM heatsink...