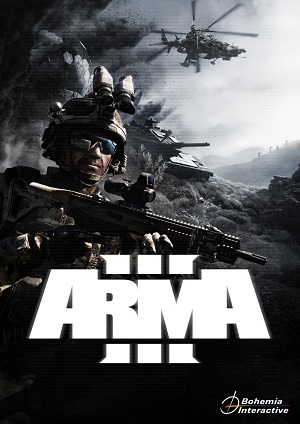 ArmA 3 Alpha is one of the hottest discussions in the PC gaming world right now. As the name suggests, it’s a public alpha build of the upcoming ArmA 3, a PC exclusive military simulation game. Access to the alpha is granted upon pre-order right now, though keep an eye out for GND’s upcoming ArmA 3 alpha invite giveaway!

This article will serve as a small review and overview of ArmA 3 Alpha. Since it’s just an alpha, there will be no score or anything; I’ll just go over what it offers, and list my observations/criticisms/praises.

The ArmA series is well known by the PC gaming community for being in a genre of its own, created by its predecessor Operation Flashpoint. The only non-Bohemia title in this genre is Iron Front: Liberation 1944, which uses the same engine as ArmA 2 and is essentially a standalone, non-official WWII expansion for it.

Other than this, there’s no competition for ArmA. Bohemia continued to raise the bar considerably with every new iteration of the series, and we all hope to see the same again with ArmA 3. Aside from this game, ArmA 2 is still YEARS ahead of its time. What makes these games so special is; they represent the actual evolution of military-themed shooters. This is where they should have gone, but instead they went backwards with the like of games like Battlefield and Call of Duty (starting with CoD 4). People incorrectly compare ArmA to games like Battlefield, which is a mistake. For all of you typical FPS players expecting a Battlefield replacement, this is NOT it. ArmA 3, like 2, is several levels above the likes of Battlefield.

So with this out of the way, let’s see what ArmA 3 has to offer. The Alpha only provides Stratis, the smaller level which is 20 km^2 of terrain, plus explorable ocean. Also provided is the legendary mission editor, public multiplayer, full mod support, and four single player showcases: Infantry, Scuba, Vehicles, and Helicopters.

Above are some of the graphics settings. You can see four tabs, each one has lots of options (more or less the same as ArmA 2). Three types of Anti-aliasing are supported and you can run two at a time, but this still leaves a lot to be desired since after all, it’s just an alpha build. Also included is a field manual for newbies.

Like ArmA 2, this game is unrivaled in terms of key bindings/customization. There are dozens and dozens of functions that can be binded to keys, or key combinations (basic macro key bindings). If only all games had this.

ArmA 3 Alpha also has full difficulty adjustment, like ArmA 2. This is yet another way in which these games are unrivaled. You can enable/disable crosshairs and many other features. Also in game options, you can configure aiming deadzone, headbob (which is worse than ArmA 2’s), and much more.

The server browser is the same as ArmA 2.

I won’t go into detail regarding the editor, since it’s just an Alpha build, but functionality is more or less the same as ArmA 2. However the layout has been simplified which is nice to see. ArmA’s editor is legendary since it allows for advanced, but relatively quick and intuitive mission creation. The only downside is, it has hasn’t really changed since the first game. Originally Bohemia announced a 3D editor, but this was scrapped.

So that serves as an overview of what’s included in this alpha build of ArmA 3. Unfortunately it doesn’t use Steamworks, but the full game will. Let’s move on and see some gameplay.

ArmA 3, like its predecessors, is not a normal shooter. It’s in a category of its own, they’re really the only military simulators around (along with Iron Front of course). It features unique FPS mechanics, third person mode, more realistic vehicle controls, and ArmA 3 is really pushing underwater gameplay as you’ll see later. The alpha has a very limited selection of items of course.

ArmA 3 has all of the different viewing modes like ArmA 2: meaning you can enable (toggle or hold) free look, which just turns the player’s head. If only more games had this feature. ArmA 3 seemingly perfects the fundamental mechanics of ArmA 2; it has a new innovative, dynamic stance feature. Not only does it have running, walking, sprinting, leaning, crouching, and prone, but you can adjust how much you’re leaning, and you can adjust your vertical stance. This is perfect for a realistic shooter like this.

The inventory has been revamped. I already thought ArmA 2’s inventory was excellent, but now it’s a bit more smooth to operate.

ArmA 3 emphasizes strategic, tactical gameplay. Like I said, it’s a simulator. Running and gunning will get you nowhere. Single player or coop is the emphasis, but coop is the best choice for this alpha build since you cannot control your squad. Maybe they’re revamping the squad control system, I don’t know, but it was perfect in ArmA 2. In coop, the leader can mark down locations on the map in real-time and everyone else will see it.

Here’s a video clip I made of the Infantry showcase, which showcases the new movement and animations. The new voice overs is apparent; your squad actually sound human, not like robots in all the previous games. One thing that stands out in this alpha build is, the mouse control. It’s extremely buggy, one time I thought my mouse was dying but it actually wasn’t. But if it wasn’t so buggy, it would be MUCH better than ArmA 2; acceleration is mostly gone.

Combat AI is still as horrible as ArmA 2. This should have been their main focus, since all the time you’ll be battling AI. They aren’t very structured, they do very strange things like camp in a corner for hours (is it trying to simulate PvP games?), and their aim is too good. For example, you can be shot out of the pilots seat of a moving helicopter easily. Friendly AI is pretty much broken in this alpha build, so don’t even bother with single-player. Just do private coop. If you have no friends then, well, I don’t know what’s worse; single player or public coop. In either scenario, your teammates will be retarded.

The main new feature of ArmA 3 is the underwater gameplay, which you can see in the above video. It’s cool; the controls are smooth, and it has some cool effects. This doesn’t seem like it should be the main feature of a sequel though, maybe a DLC but not a sequel. And now here’s the vehicle showcase, in which they showcase the new highly detailed interiors, new animations, and picture-in-picture mirror/camera system. Vehicle controls are pretty much untouched since they were perfect already.

Notice how realistic vehicle damage is, and the fuel requirement. These showcase missions are actually quite decent… very basic, but that’s not a bad thing. Since ArmA 3 is such a realistic game, in the sense that aiming is more realistic, ballistics are spot on, and you die very easily, even the simplest scenarios bring unrivaled intensity in a shooter. There’s also a helicopter showcase but not much has changed there.

I think that pretty much sums up this section, so now let’s look at the audio and visual quality of the game as well as optimization.

As a cruel joke, I took to calling this game ArmA 2.5: Operation Optimization, since that seemed to be the main focus of ArmA 3. In fact it still seems to be, but this being an alpha build, optimization isn’t great but still MUCH better than ArmA 2. It runs much smoother, though graphics are actually slightly worse due to the highly inferior ambient occlusion.

The lighting system is improved over ArmA 2’s, but colors aren’t really deep enough. Wind seems to affect vegetation more and bump mapping seems slightly better, but the noticeably inferior water, anti-aliasing, and ambient occlusion make it look worse than ArmA 2. Oddly enough the sat map is also much lower quality. But it’s hard to complain, since it’s just an alpha, it still looks good, and runs so much better than ArmA 2.

With my i7 2600 @ 4.2 GHz and GTX 680, ArmA 2 runs at 35-50 FPS with Quality ambient occlusion, 2500 view distance, and a mix of very high, high, and medium settings (medium terrain quality makes no difference in visuals). ArmA 3 with 3500+ view distance, high quality ambient occlusion, slight downsampling (2048 x 1152), and everything but terrain quality maxed, runs at 40-60 FPS. It’s MUCH smoother. I also noticed that hyperthreading makes no difference, as expected. So at least they’re doing a good job with their main goal, even if their main goal is misplaced.

Audio quality is noticeably improved too. Voice overs actually sound human now, gun sounds are enhanced (similar to ArmA 2 with ACE 2) but still not quite on the same level as Battlefield 3. There’s definite room for improvement in terms of sound effects, but they’re not bad… slightly above average in fact. Footsteps are nice, audible, and realistic. Explosions are pretty loud, and overall the sound effects are pretty good but could be better.

This is just an Alpha build, so there will be no scoring. I’ll list my overall thoughts on the alpha, and where I see the game going. I’ll be clear; ArmA 3 does not seem like a proper sequel to ArmA 2. I don’t base this just off the alpha; the alpha is almost exactly what I expected (I just expected graphics to be better). But if you look at Bohemia’s main goals for ArmA 3, and how seemingly little they’ve done over the years (ArmA 2 came out in 2009, Operation Arrowhead in 2010), it’s disappointing. I’ll break it down.

If you’re new to the series, definitely pick up ArmA 3. No need to get ArmA 2 once this game is out. If you’re a long time ArmA 2 player, it can be somewhat difficult to justify purchasing this game. Then again it’s only around $30, so it’s not that bad. ArmA 3 seems like a DLC and patch for ArmA 2, not a sequel. A sequel should have new, leading features over the predecessor. ArmA 3 originally had this; 3D editor (the editor is, after all, the main feature of ArmA, since default content is never exceptional), ability to put on enemy uniforms to go undercover, and extensive PhysX usage. All of this is now removed, so we’re essentially left with ArmA 2.5.

Essential Mods for the S.T.A.L.K.E.R. Series