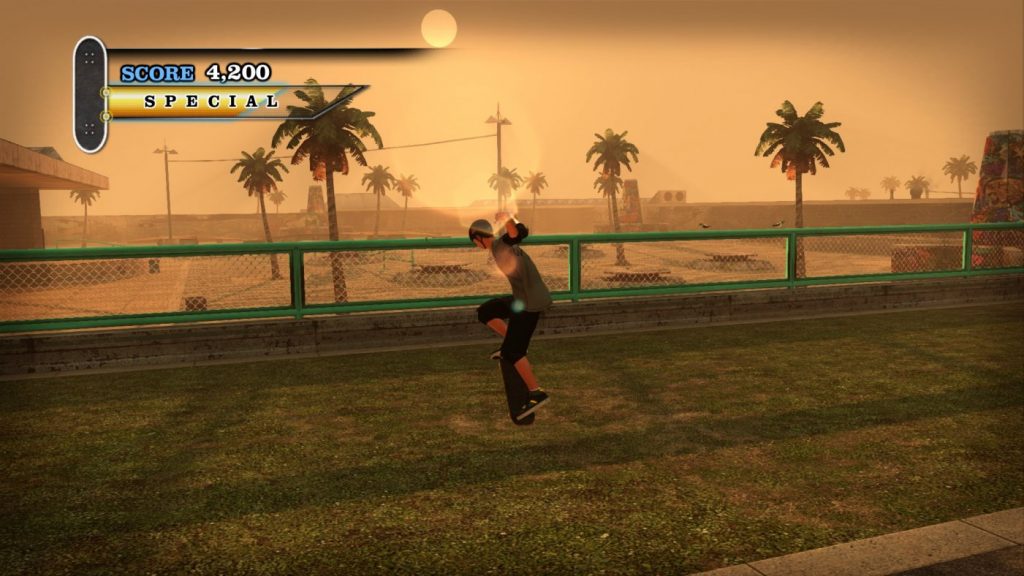 It looks like I have the privilege of writing the first sports game review here at GND-Tech. Or is it not a privilege? In any case, Tony Hawk’s Pro Skater HD has recently been released on PC, about two months after its XBOX 360 release. It is essentially a compilation of content from the first two games, remade on Unreal Engine 3.

This is not the first time something like this was released: Tony Hawk’s Pro Skater 2x, an XBOX launch title, combined just about all of THPS 1 and 2 into one game, remade on a newer engine (and additional content was added). The only thing it was missing was the moveset from THPS 1, but regardless, that was a very impressive game. Lets see if THPS HD can impress.

Tony Hawk’s Pro Skater HD was developed by Robomodo, a relatively unheard of name. Publisher is Activision as with the previous titles. It retailed for $9.99, though can currently be found for $8.99 on Steam, which is how I obtained the title.

It’s a very small title; its folder is only 1.22GB in size. As I initially expected, THPS HD is a horrible console port. There are no in-game graphics options, so by default the game is locked to 1280 x 720 (720p). You can’t adjust key bindings either. To change key bindings, graphics settings, and resolution, you must edit its ini files in its Engine\Config folder.

Note that there is no mouse support at all. The game is controlled via keyboard only which makes sense for this type of game. Unfortunately, gamepad support isn’t included, even though the gamepad shows up in the options menu.

Don’t get your hopes up: this game is NOT a full remake of THPS 1 and 2. It includes only seven levels, some from THPS 1 and others from 2. It’s also missing many key features from those games, namely a level editor, character creator/editor, recorded replays, and more as you’ll see later. There was talk of DLC, namely a level editor and THPS 3 content. But seriously, more content from THPS 1 and 2 need to be added before going to 3. For a compilation like this game, they should include at least the best stuff from the first two games, but instead only THPS 2 moveset is included, they chose some of the more bland levels, and lets not forget the aforementioned cut features.

So, let’s look at what the game has to offer. Since no character creator is included, you have to choose one of the default pro skaters. Only four return from THPS 1 and 2, the rest are new. Several fictional unlockable characters are also included. Here you can see their stats, which can be improved as you earn cash throughout the single player missions. There are several different clothing styles for each skater too.

Notice the Skate Shop feature shown in the above picture. This takes you to this menu, allowing you to assign/purchase moves and new skateboard decks. New decks are unlocked as you complete objectives, but you still have to purchase them. Note that very little or no decks from THPS 1 or 2 return. These are all modern decks, not classics. I was disappointed by this.

Moves are purchased/assigned the traditional way. It works well and is very clear. You can assign flip tricks, grab tricks, lip tricks, and special tricks. Flip and grab have their own dedicated keys, while lip tricks share the same key as grinds which unfortunately can’t be assigned. Special tricks use these keys plus a unique directional combination. Note that only moves from THPS 2 and the few extras from THPS 2x are included.

There are several different single player game modes: Career, which includes level-specific goals such as those shown below. There’s also a timed Single Session, in which you just skate around to set a score for that level. The other default mode is free skate, which is self explanatory. As you progress through the game, more modes will be unlocked. They added a map that shows the objectives, for those who get stuck. In addition to objectives, there’s also a gap list which lists all named jumps on each level.

As you can see, completing objectives earns cash, which can be used to buy new decks, improve stats, and buy new moves. Gameplay mechanics are just like THPS 2: successfully performing tricks earns you points, and these points can be accumulated via combos. These points are used for the High Score/Pro Score/Sick Score objectives, as well as personal records and benchmarks. Accumulating points is also used to perform special moves. The more points you get in a short amount of time, the more the SPECIAL meter increases. Once it starts glowing yellow, a special move can be performed.

Yes, I landed this one.

As you can see in the pictures below, grinds and lip tricks, but also manuals must be balanced in a straightforward manner.

If you fail to balance the move, you’ll crash and burn. You’ll also fall if you fail to land a move properly.

Wall rides are a move used to get to many secret areas. Secret areas can be found on every level. Remember: the levels are from THPS 1 and 2. Developers were very clever with level design back then, so this applies to this game as well.

Some of the levels have some dynamic interference, to spice up the gameplay. An example is this guy driving around the School II level, who you must avoid.

You may also encounter big drops, for which you must hold the space bar to land.

Although the mechanics remain identical to THPS 2, which is a good thing (though most prefer the evolved mechanics introduced by THPS 3, this will be added in a DLC), the game suffers from a number of technical issues. Although the game uses UE3 and PhysX, these aren’t used properly and a number of physics/collision bugs can be encountered. This clearly screws up with gameplay, since a skateboarding game is fully dependent on physics. A good example of this would be when I go to grind a rail, but a physics glitch causes me to get stuck in the rail and fall down.

And keep in mind that “falling down” is equivalent to dying in a shooter.

Clipping issues are also present; it is possible to fall through a level, but luckily you respawn back on top in a manner of seconds. I also discovered two ridiculous bugs: you cannot assign a trick to [code]Left Left ,[/code] or [code]Down Down .[/code]. If you attempt to assign a trick to the former, it simply unassigns when the game starts, and you’d have to buy the trick all over again. If you attempt to assign a lip trick to the latter, the move executes in game but no balance meter is present, and you can’t even land normally.

Some other gameplay bugs include gaps/transfers (jumping from a ramp/quarterpipe to another) not working properly: rather than landing on the other gap, an invisible wall or misplaced physics entity makes them impossible to land. Several gaps are like this. Sometimes your character falls down for no reason, and also when respawning, you might get stuck in the ground and fall again. Another issue is the stop function, which is just when you hold s to stop your character from moving. Many times this doesn’t work, or takes many tries to work.

The game has some input delay, which is understandable for a game like this and also fighting games. But there seems to be too much delay: for example, lets say I want to do a special move (flip trick) in the air. To do this, I should have to press the combination its assigned to in mid air (let’s say, [code]Left Right ,[/code]). However, on the ground, let’s say I’m simply steering my character using Left (A key), and then I jump and press [code]Right ,[/code] to do a simple flip trick. However the game registers me as pressing the special move combo, even though I started on the ground. To put it bluntly, input delay needs to be thought over some more.

This has nothing to do with my keyboard either: I use a Cherry MX Red switch mechanical keyboard. Mechanical switches have lower response time than typical rubber dome/membrane keyboards, and game controllers use pretty much the same tech as a normal keyboard. These mechanical switches are also linear, so I know I’m not making mistakes in this regard. I’ve done adequate testing to ensure this.

In addition to various bugs, glitches, and oversights, I also can’t ignore the amount of missing content. Now, I don’t expect a full THPS 1 and 2 remake/compilation for $9.99, but the game is still incomplete. Multiplayer is not included, but that’s understandable. I suppose it’s also understandable that many levels are not included, since combining THPS 1 and THPS 2 levels results in… dozens… too many to count off the top of my head (especially if you factor in the few additional levels from 2x). But seven levels is just too little, especially with the lack of a level creator/editor. Looking at the levels they chose: one skate park was chosen, two other levels are too similar (Hangar and Warehouse), two downhill levels are included (Downhill Jam and Mall), and all but the two similar levels and the one skatepark are focused specifically on street skating. So they could have chosen more/less redundant levels.

What’s even more disappointing is that the devs didn’t make any comment about adding the rest (or just more) of THPS 1 and THPS 2 content. They’re instead looking to throw in some of THPS 3 content next, But before any DLC is released, they seriously need to patch the game to fix the aforementioned bugs plus any others I missed. Oh yeah, and add in in-game graphics options and key bindings too, will you Robomodo?

THPS HD uses perhaps the most common engine today: Unreal Engine 3. It has great potential, and even though it isn’t fully utilized in this game, the graphics are satisfying. Industry leading graphics certainly aren’t needed in such a fast paced game either. You’re moving pretty much all the time.

UE3’s post processing is obvious, but I can’t ignore that the game overall looks a bit dated.

NVIDIA users will be able to use SSAO, through NVIDIA Control Panel or NVIDIA Inspector. I can’t speak for AMD.

Audio quality is good, and some of the songs from THPS 2 return. But many are missing, and although there are a few new ones, there seems to be too little plus no way to add your own songs like in THPS 2x.

Whether you’re new to the franchise, or are a veteran fan of the series like I am, Tony Hawk’s Pro Skater HD is bound to disappoint you. Technically speaking, it’s a mess. The game is littered with bugs, some relating to physics while others are simple oversights on behalf of the developers/programmers. It also doesn’t help that it’s one of the most sorry console ports around. It’s missing too much content, mainly a level creator/editor, character creator/editor, replays, and it only has seven levels. Although DLC is planned, they’re moving through the franchise too quickly as they’re already looking to add THPS 3 content, and before any DLC comes, they need to patch the game. 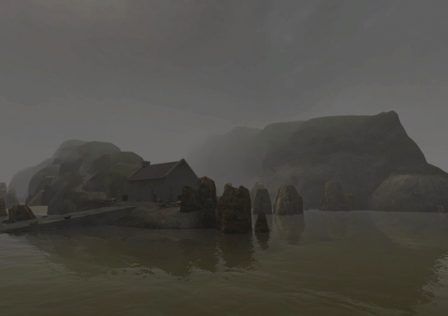