Best video game battle(s) you've ever been in?

As the title says.

For me, it's between two: the finale of Neverwinter Nights 2, and wiping out Dawnguard in The Elder Scrolls V: Skyrim on behalf of Clan Volkihar.

The former is such a large scale, strategic battle with some of the best pause-and-play gameplay out there, and finding out the right strategy for the battle was a tough but very rewarding process. Also, using the Silver Sword of Gith made it even more fun: this sword is one of the most powerful and unique artifacts/weapons I've ever come across in a game. Plus it's nice to have all companions join the battle for a change, and they're all under my command too. 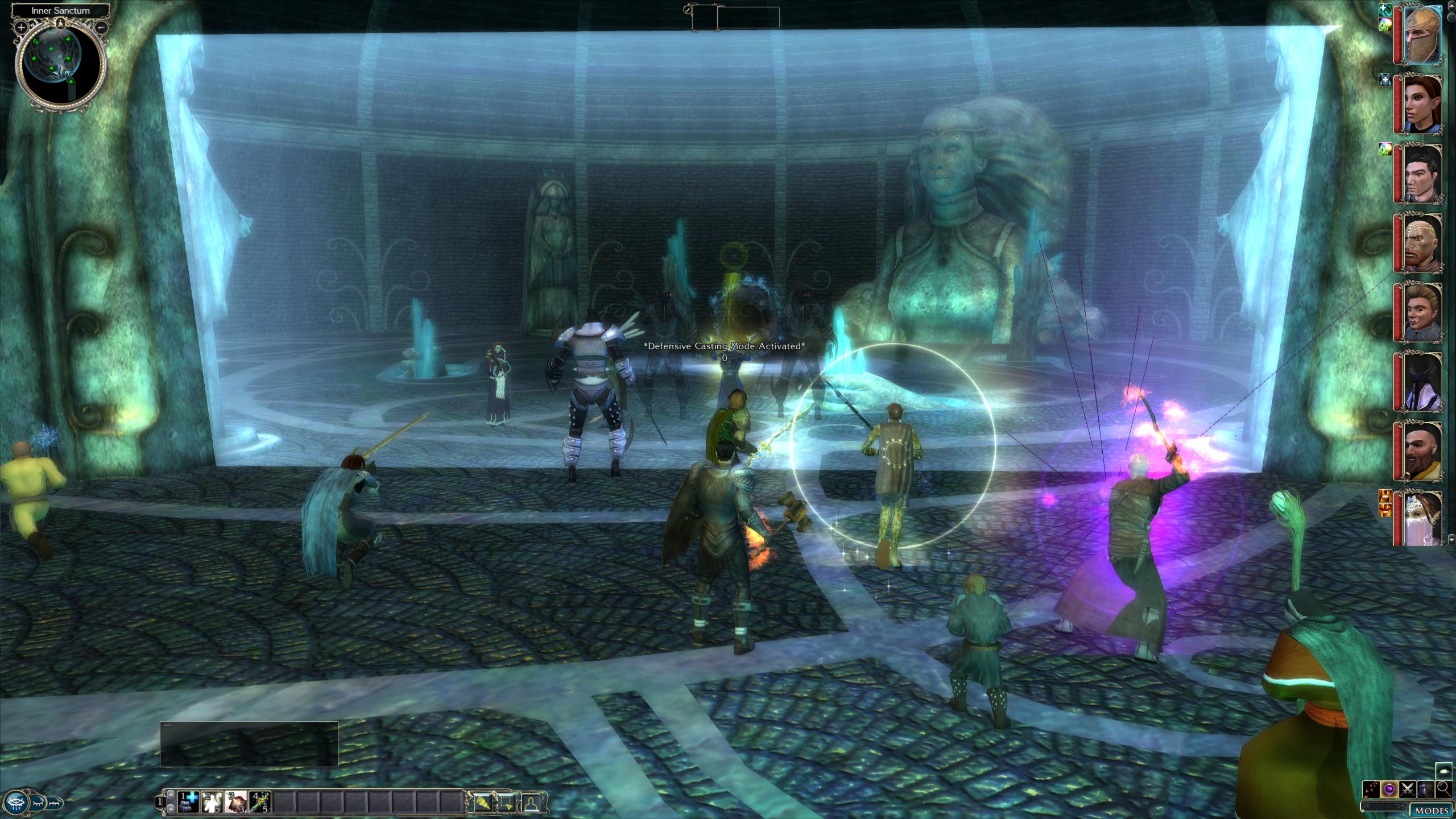 Here are two videos showcasing the battle (it's really two battles, hence me splitting it up into two videos). I actually didn't use the Silver Sword of Gith except for the one task that required it, since my character is an Arcane Archer.
https://www.youtube.com/watch?v=_eAz2PrEIQI

As for the aforementioned Skyrim battle, it just went so smoothly for me. My character was a Dunmer necromancer, who also had powerful destruction spells and was of course a vampire lord. I was able to trap the majority of high ranking Dawnguard members in a room with several very powerful summoned creatures of mine (a Dragon Priest and a Dremora Lord if I recall correctly). Anyone who wasn't trapped outside, like Isran... I had a lot of fun with them. I ended up reviving Isran as my thrall. The thing about this battle is, it will never play out this well ever again. Skyrim is too dynamic.

What are the best video game battles you've ever been in? Feel free to post any pics/videos of these battles.

It's hard for me to think about it since I've had many awesome and memorable fights, and probably some that were awesome and I don't remember.

I'll describe a few of my most memorable at least, not sure if they are truly the most epic/best I've had but here we go.

One would be the Varterral in Dragon Age Origins DLC Witch Hunt. Easily the most difficult boss fight in Dragon Age: Origins, even though by the time you face it you're already very high level. For some context, a Varterral is an ancient creature that was 'created' by the Ancient Elves of Thedas to protect over their sacred lands. They have rock like skin and a bunch of legs. Also, they can't die.
So yeah the first time I fought it was the most epic and it was as my Dual Weapon Warrior, I think I was level 32. My story isn't exactly exciting, it consisted of me getting my ass kicked and trying different strategies until I could bring it down.

Another would be what I dubbed 'The Battle of Camp Forlorn Hope' from Fallout: New Vegas. I was playing as a low level NCR recruit when word comes that the Legion are launching a massive assault on Camp Forlorn Hope. All the troops at the camp mass to the east side where they're striking from, and my character happened to be a Sapper(Explosives expert), so he was on the right lines laying down mines and lobbing grenades. It was a fairly long fight for New Vegas standards, it consisted of me hurling grenades and popping up to let off a few rounds every once in awhile. I don't have an exact count of how many NCR troops we had to begin with but we lost 28 people, with only ~5 or so survivors. Managed to kill the vast majority of the Legion soldiers attacking the camp, the remainder retreated. It was intense and I was surprised I didn't die and have to reload.

Honestly, this last one may be my favorite battle of all time. It comes from the final mission in XCOM: Enemy Unknown. Let me note that this was my first time playing, the actual final mission is quite easy because it's 100% linear unlike just about every other mission in XCOM:EU. So yeah, this was my first time playing so it was completely new to me.
As for the actual battle, here it goes.
So it took place in the final room in the last mission, I had managed to keep everyone alive throughout the mission but some of us were pretty banged up and I was out of medkits. We enter the final chamber to the sight of 2 Muton Elites, 2 Ethereals and 1 Uber Ethereal. The objective of this mission was to keep our Psionic soldier alive, and that's what we were gonna do. So the battle erupts and a few turns go by exchanging fire. Suddenly one of the etherals throws a rift into a group of my soldiers, instantly tearing two of them apart. Things weren't looking good. I manage to take down one etheral but right after, the other Ethereal throws another rift and tears apart my Heavy(who was nicknamed Jester), this soldier was the original survivor from the very first mission, killed over 100 aliens himself and had been on nearly every single mission. It was hard to watch him die, it was hard to watch any of them die, they were all my A-Team, soldiers that had been on 25+ missions each and nearly 100 kills each individually. Anyway, after losing him, I had 3 people left, thankfully the Psionic soldier was still alive and well, as was my Sniper. I tried to do some damage to the living Ethereal with my sniper but it wasn't enough to fully take him down, and with that he mind blasted my medic who was still alive but badly wounded and killed him. It was down to my Sniper to keep the psionic soldier alive. We took down the last regular ethereal but that still left the uber ethereal. In a desperate move, my sniper moved out of cover(not that it mattered against them) and used a powerful ability to knock down the ubers health to 2 bars. Right afterwards, he was torn to pieces by a rift from the uber ethereal. That left my psionic soldier by himself, so he moved up close and used his last action to shoot and kill the uber ethereal. The battle was over and *Potential soldiers for the end of XCOM EU* he went on to sacrifice himself to save the world from complete destruction *end of spoilers*.
That day, my entire squad gave their lives to keep one man safe, and that man in turn gave his life to secure the future of humanity. I honestly cannot think of a more heroic way for any of them to die. It was truly an epic battle.

I remember you telling me about that XCOM fight. It's worth mentioning that for the Varterral fight in DA: Witch Hunt, Combat Tweaks mod changes it up significantly right?

Your NV battle made me want to post some of my crazier Fallout experiences.

Fallout 3:
Cool video, and the first time I caught a Ghoul reanimating on video.
https://www.youtube.com/watch?v=U_mbdBQkZPg

Sequel to the above.
https://www.youtube.com/watch?v=36jE1slx8AE

This is one of my coolest battles in NV.
https://www.youtube.com/watch?v=16oH2R6v98E

Even just the start of this one...
https://www.youtube.com/watch?v=IK0KCIp2EoY

All of those are insane battles. Practically every AWOP location will be full of them. Also, I suspect you have had a lot of awesome battles in ArmA 2, Enad.

Bumped with two videos of that NWN 2 battle in the OP.

Here's another great one.

lol @ the intro music. That would be a lot cooler if the map didn't seemingly disappear in such a small radius. Reminds me of a WIP map.

lol @ the intro music. That would be a lot cooler if the map didn't seemingly disappear in such a small radius. Reminds me of a WIP map.

It actually is a WIP 😀

BTW, this is the Warhammer Dawn of War 3 we didnt get...

And yeah, took you long enough to become a TRU MAN (TM)

And yeah, took you long enough to become a TRU MAN (TM)

lol, well I made up for it by jumping into the deeper end with Total War. And I'm pretty good. Warhammer 2 on hard difficulty, haven't lost a fight yet. Not that this is my first Total War, been playing them for over a year now. 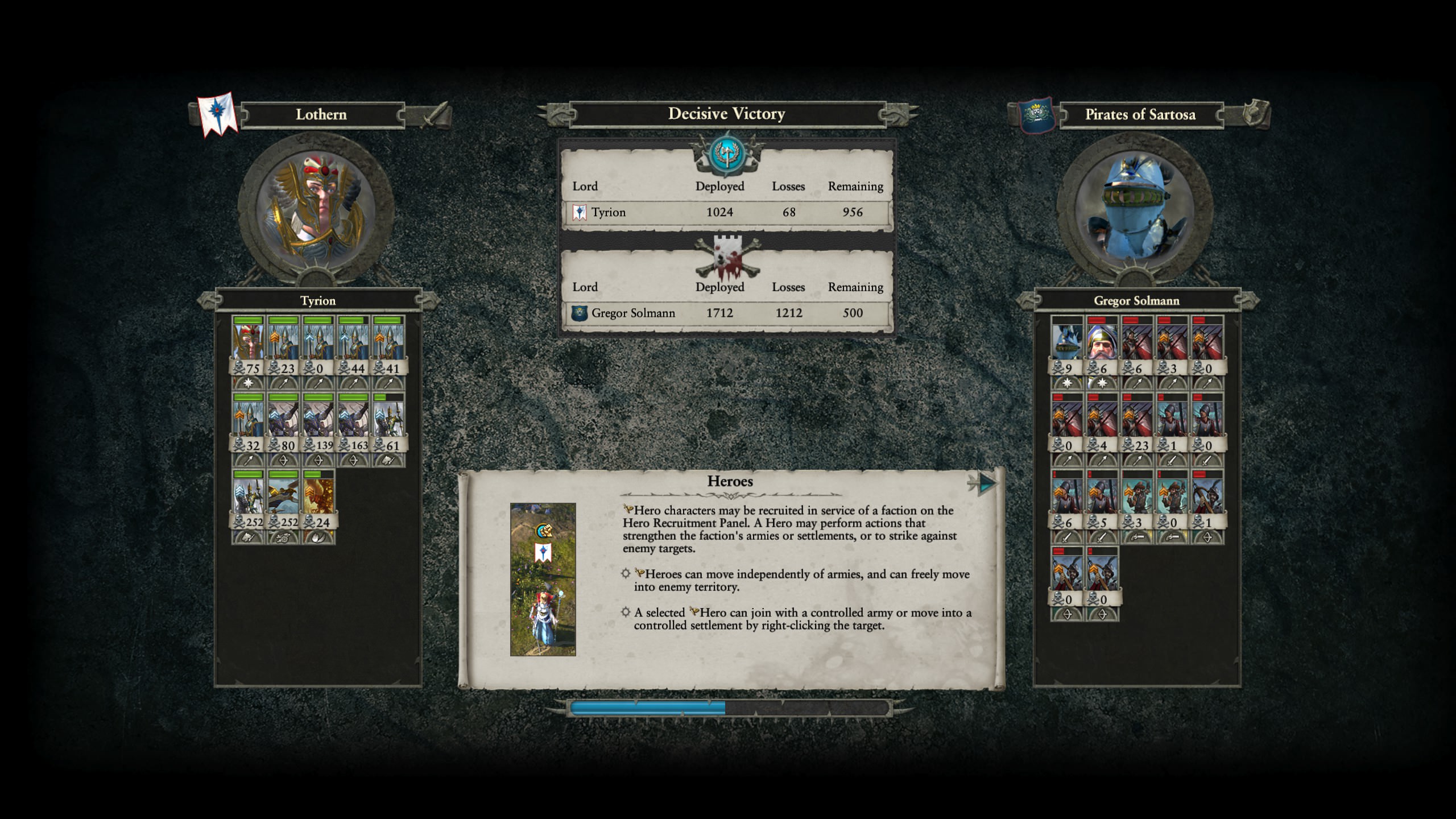 @ Jester are you a fan of Starship Troopers?

Not particularly. Cool mod though.

Made my first Total War video. It was my second ever ambush in WARHAMMER II, and the first one in my favor. No editing. Slaughters like this are always fun.

I really love how the city is steadily being destroyed... and all the people dead from debris and spalling.

^ Cool destruction, would like to see higher quality terrain though.

I finally recorded a good battle in Total War: WARHAMMER 2.

If you're wondering why it took so long, it's not because I've been losing battles since I haven't been, I'm playing as Lothern which starts off as one of the most powerful factions in the game so it's pretty easy. I've been able to pick and choose battles where I have a huge advantage, so most of my battles have just been slaughters.