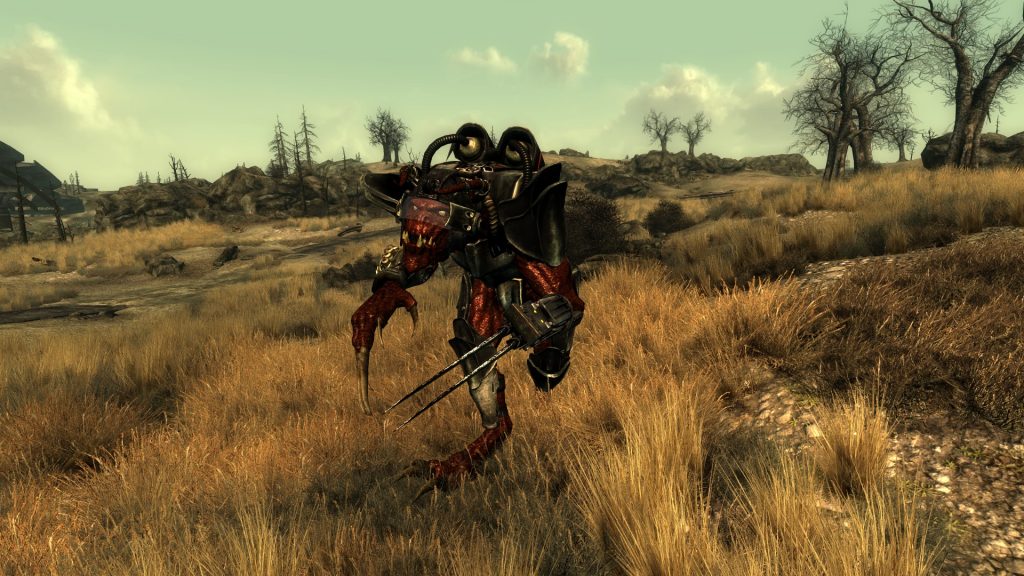 In a random turn of events, we’ve decided to put up this fun little series. Most of us have played Fallout 3, and noticed both how difficult it is when modded and on the hardest difficulty, and also the awesome enemy design especially with Mart’s Mutant Mod. I decided to have fun with these… first I put together a fun little, poorly organized tournament which you can find here. That was fun, and the Deathclaw Matriarch emerged victorious, but I left out some creatures to make it fair and only pitted together certain creatures. So I’ve decided to make this fun little compilation and share it with the world.

Of course, I’m using all of these mods since that’s the only way to play! Let’s begin the countdown! Forget the countdown to 2013, this is far more entertaining.

Number 15 is reserved for the Abominable Mutant. What a start!

This specimen was added by Mart’s Mutant Mod. Remember those things lying on the test beds in Vault 87? Well as it turns out, they’re not all dead. Some of them can now be found wandering around the Wasteland, usually in the company of their superior Super Mutant brethren. Although not quite as dangerous as Super Mutants, and they rely on an abundance of drugs to survive, they are still a force to be reckoned with.

The Deathclaw Young came in at #14. It looks like a harmless little critter, right?

Yet another creature added by Mart’s Mutant Mod. Baby Deathclaw might not look so dangerous, but looks can certainly be deceiving.

Say hello to the Albino Radscorpion. Quite an ugly thing.

This creature is added by the Broken Steel DLC. It is the largest and toughest of all scorpions in the game. It might not look like much, at least in comparison to some of the other entries, but wait until you find one yourself.

The Sentry Bot placed #12. I’m sure most of you remember being terrorized by these.

This hunk of metal is both extremely hard to take down, and loaded with fine weaponry. The only effective weapons against these are melee, energy, and explosives. However it’s hard to approach Sentry Bots due to their arsenal which includes a missile launcher, and either a Minigun or Gatling Laser.

No more games! For #11, we’re looking at the Super Mutant.

It’s crazy how this beast comes in at only #11. With the right mods, you’ll never be able to fight one of these head-on without a Missile Launcher/IRV, without an Alien Blaster, or without spamming stimpaks. Not even at lvl 30 with perfect Power Armor. So what does that tell you about the other creatures on this list?

What happens when you take a Super Mutant, one of the deadliest creatures in the game, and you give it power armor and new weapons? The result is this, the Super Mutant Enforcer. Added by Mart’s Mutant Mod, you’ll find these creatures in possession by the Enclave. As if Enclave controlled Deathclaws weren’t enough.

They’re equipped with enormous wrist-mounted blades and all sorts of grenades, which they hurl with absurd accuracy. A dangerous foe at all ranges, the Super Mutant Enforcer managed to squeeze into my top 10 list.

This is probably the hardest enemy you’ll encounter at lower levels, aside from scripted encounters. The Brute is a larger, armored, and better equipped Super Mutant.

Even larger than the Brute, and even better equipped, the Master usually leads small groups of Super Mutants. For a while it will be the deadliest non-scripted encounter in the Wasteland.

An infamous mutant across the Wasteland. The Deathclaw has devastating melee attacks with… what else? Claws. Very big claws. Exceptional range and knock-down power helps the Deathclaw dominate almost anything it comes across.

This creature is quite a bit smaller than most of the others on this list, but he’s far more tough than he looks. I’m of course referring to the Feral Ghoul Reaver.

This creature, added by Broken Steel, dominated my Ballsout 3 Battles tournament and nearly won, ending up in spot #3. What makes this creature so dangerous is the speed, and how hard it is to bring one of these down. They can take a bit more punishment than a Super Mutant Overlord, Deathclaw Matriarch, and Deathclaw Alpha, and has both close range attacks (claws) and longer range attacks (“radiation bombs”). These are tough foes at any level.

Looks like we’ve reached the top 5! Starting things off here is the Super Mutant Overlord.

Added by the Broken Steel DLC, the Overlord is one of the absolute worst creatures you can encounter. It is in between the Master and Behemoth. With a health value of 1,250 and deadly weapons such as the Tri-Beam Laser Rifle, Gatling Laser, or Missile Launcher, a single Overlord will ruin your day.

Mother of [s]God[/s] Deathclaws… the Deathclaw Matriarch ranks in at number four. This was the winner of my aforementioned tournament.

The winner of my “Fallout 3 Battles” tournament, the Deathclaw Matriarch is brought to us by Mart’s Mutant Mod. I don’t know whether to thank him or scold him, for the Matriarch is one of the deadliest creatures in the game. If you thought the regular Deathclaw was bad, wait until you encounter one of these. The Matriarch is much larger, giving it much more range, it’s more powerful, and has over twice the health.

This was a very tough choice, but I rank the Deathclaw Alpha at #3, just above the Matriarch.

Added by Mart’s Mutant Mod, the Deathclaw Alpha is one of the deadliest creatures in the game. It uses the same formula as the Super Mutant Enforcer: take one of the deadliest creatures in the game, give it very effective armor, and better weapons. However the Alpha is a bit more than that; perhaps an Alpha male? It’s much larger and seems to have much more health than the regular Deathclaw (but less than the Matriarch). It is also controlled by the Enclave. The armor makes it extremely difficult to do any sort of damage if you lack explosives. Although the Matriarch beat the Alpha in my tournament due to its superior range, I consider the Alpha to be more dangerous to the player due to its armor and seemingly similar health. But it’s a very close call.

Hmm… suddenly all the aforementioned creatures look really small. Perhaps it has something to do with the Super Mutant Behemoth ranking in at number two? And yes, number two, not one.

I’m sure everyone remembers these. Since most of you played the unmodded game/console game, you’re probably wondering, what the heck can top this thing? It’s impossible to take down, kills in 1-3 hits, and is the size of a small building.

The Super Mutant Gargantuan takes the number one spot, no contest. Anyone with Mart’s Mutant Mod should have seen this coming.

Anyone who has played this game with Mart’s Mutant Mod knows these creatures. It’s everyone’s worst nightmare. If you thought the Behemoth was bad, wait until you see this. The Gargantuan stands several stories high and uses nothing but a giant fist to squash its opponents. It takes groups of powerful opposition to take one of these down (or a Fat Man or Experimental IRV with enough ammo, of course), or just strategy as my bottom video on this page shows.

I was hoping that the Mirelurk King could squeeze in at #15, but nope. In reality I think maybe the similar Swamplurk Queen might be #16, with the Glowing One at #17 and the Mirelurk King at #18. But nevertheless I wanted to include the Mirelurk King somehow since it’s a great, unique enemy design and one of my favorites.

Not nearly one of the deadliest creatures but still quite deadly. I’ve added this entry simply because it’s one of my favorite creature designs. Highly original and quite creepy, the Mirelurk King is a dangerous foe at long range thanks to its brain-crippling sonic projectile attack, and its large claws ensure damage at close range.

Good call with the sound enhancement, I've added it.

I would never call the HD Mods "essential" by...

Yeah, I haven't seen much activity here, so my...

It was certainly a weak year, to the point...